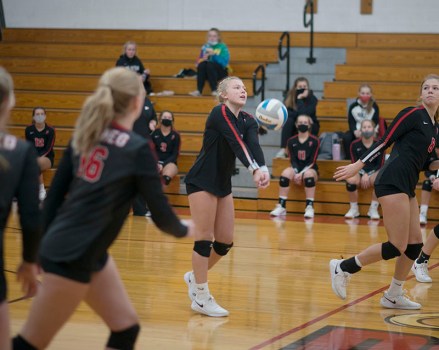 NRHEG sophomore Sidney Schultz returns a serve Tuesday night at home against Waterville-Elysian-Morristown. Schultz had one dig in the 3-0 loss to the Buccaneers. - Tyler Julson/Albert Lea Tribune 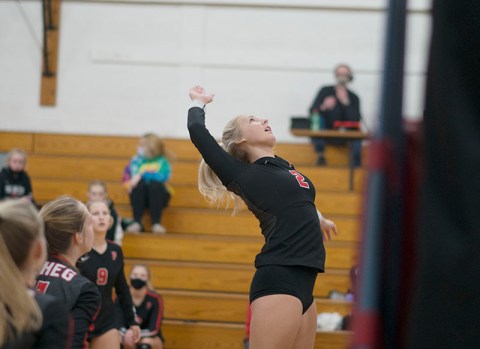 Senior Anna Jacobson gets up for one of her four kills Tuesday night at home. - Tyler Julson/Albert Lea Tribune 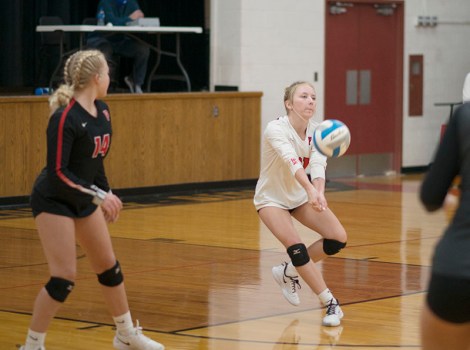 NEW RICHLAND — The NRHEG volleyball team hosted Waterville-Elysian-Morristown Tuesday night in what could prove to be its final match of the season.

The Panthers were no match of the No. 2-ranked Buccaneers, who used a flurry of powerful kills to send the Panthers reeling.  Eventually the Buccaneers came out with the victory, beating the Panthers in three straight sets.

It was evident from the first set that the Buccaneers were going to be a tough matchup after they jumped out to a 10-5 lead. They advanced their lead to 16-7, forcing the Panthers to call a timeout to regroup. The timeout proved to be futile as the Buccaneers went on a 9-1 run to win the set 25-8.

It seemed as though the second set might end worse than the first for the Panthers after the Buccaneers went on a multiple punishing runs to take a 14-2 lead. The  Panthers took their second time out and fell behind 19-5 after the break. They went on a small run themselves before the Buccaneers pulled away to finish the set 25-10.

The momentum was fully in the Buccaneers favor in the third set. The Panthers quickly fell into a 15-3 hole and were unable to mount the comeback effort necessary to make a dent in the lead. The Buccaneers went on to win the set 25-6 and the match 3-0.

Johnson led the Panthers in digs with seven, while senior Cambria Nissen had five and Schultz had four. Tufte along with sophomores Raquel Fischer and Sidney Schultz combined for three.

“Hats off to WEM, they are an extremely tough team,” said head coach Onika Peterson. “There is a reason that they have been highly ranking in state all year. I am proud of our team and how much we have improved from the beginning of the season to now.

“We started the first trip through the Gopher Conference without a win until we matched up against United South Central. Following that game our team had a big win against Blooming Prairie and Maple River. These next couple games are tough with the top three teams in the conference Waterville-Elysian-Morristown, Faribault Bethlehem Academy and Medford. I am happy that we have been able to have a season and we did not have to shut down with COVID-19 cases like so many other volleyball teams in the area. I appreciate the effort the girls have been making.”

The Panthers fall to 3-8 this season. Their next game is scheduled to take place Friday night in New Richland against Bethlehem Academy, however, the status of that came is in the air.

Governor Tim Walz is scheduled to address the playing of sports in the state during a conference Wednesday afternoon. It is anticipated that a “pause” will be put on high school activities. As of press time, however, it is unknown when the pause will be started.