Charles A. Schneider, 82, died October 9, 2020, peacefully in his sleep surrounded by family at home in Frankfort, New York from Idiopathic Pulmonary Fibrosis. He was born September 16, 1938 in Albert Lea, Minnesota to Albert E. and Marie (Stephenson) Schneider. At a young age, his mother taught him to read music notes on paper well before taking him to the piano. He also played the violin his grandfather made. 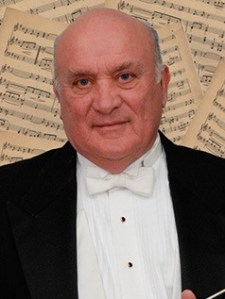 He graduated in 1956 from ALHS where he excelled in sports, music, and other activities. He continued his education at Cornell College in Iowa, class of 1960, where he chose music over sports. He continued his education at Julliard in NYC. His conducting career lead him to Broadway in the 1960’s and included West Side Story at Lincoln Center alongside Leonard Bernstein.

In the 1970’s he moved on to symphonic music and took a position with the Kansas City Philharmonic. Next he accepted an offer to study conducting with Igor Markevitch (National Symphony of Monte Carlo) and Herbert Blomstedt. Later, Blomstedt named Chuck assistant conductor at the Aspen Music Festival. While at the festival, Chuck met a young couple who invited him to be the music director of the Catskill Symphony Orchestra in Oneonta, New York. He later became the music director and conductor of that Symphony, co-founded the Catskill Conservatory at Hartwick College in Oneonta, NY and became the founding music director of the Glimmerglass Opera in Cooperstown, NY. Chuck later received an honorary doctorate from Hartwick College. He was also given many other awards for his contributions to music and the arts.

Over time, Chuck was also the music director and conductor of the Schenectady and Clinton Symphony Orchestras. The musicians enjoyed playing for him as he was even-tempered, encouraging, and had a good sense of humor. On five different occasions, Chuck traveled with the musicians to perform in Europe.

He was a member of the New Hartford Presbyterian Church. Due to Covid restrictions, a virtual memorial service will be held on Saturday, November 21, 2020 at 1 pm (ET) with Reverend Dr. Sue Riggle officiating. Immediate family will be in attendance. Internment will follow in the Frankfort Hill Cemetary. Those wishing to view the memorial service can log in to the church’s Facebook Page, as well as the church’s website , newhartfordpresbyterian.org where the service will be livestreamed. Arrangements are with the Dimbleby Funeral Homes, 40 Main Street, Whitesboro, NY.