Living the dream: One Guardsman’s reflection on life as a Hispanic American immigrant 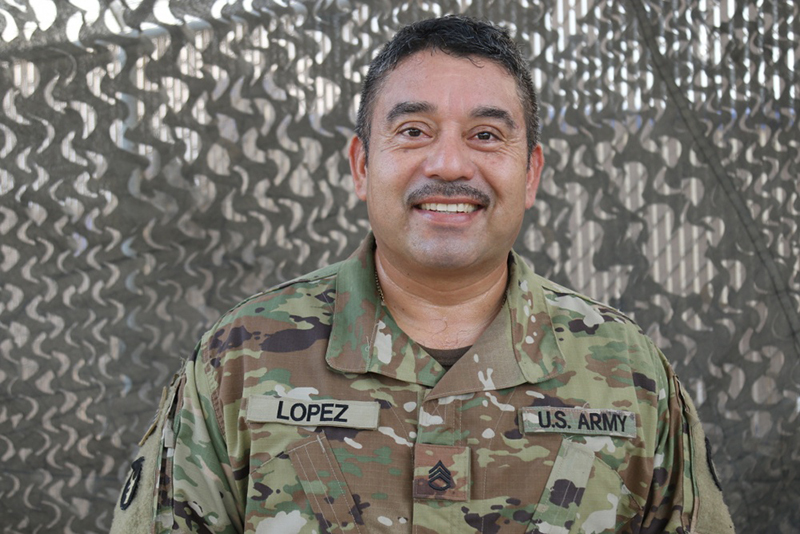 DJIBOUTI — Francisco Lopez was only 8 years old when he saw his first soldier. Born and raised in Caltimacan, a small village in the state of Hidalgo, Mexico, he recalled a beautiful spring day when he saw a Mexican Special Forces soldier he had seen on several occasions before, standing on the main street of his hometown.

“It was around mid-day and it was cool out with a beautiful bright blue sky,” Lopez said. “The sky is always blue there.”

Lopez remembered walking alongside the soldier and asking him all the questions a “nosey and curious” child would ask: “Do you like being a Soldier?” “Have you ever shot anybody?” “Can I carry your rifle?”

To his delight, the soldier answered “Yes” to the latter question, and handed his shiny rifle over to him. Lopez stood tall and proceeded to march down the street between the brick buildings of the village, painted brightly in shades of blue, red and green.

“I marched down the street pretending to be a soldier,” Lopez said with a smile, recreating the motion of holding a rifle in his left hand and swinging his right. “It was a dream of mine.”

Five years later in November 1985, Lopez was 13 years old and living in Dallas, Texas. His mother, Raquel, and father, Jose, had been living in the United States since 1980, working on making a home for him and three siblings while he stayed with his grandparents back in Caltimacan. In the end, it would take the family of six a period of 13 years to all immigrate to the United States and be fully reunited.

“It was a process with immigration,” he said. “One person’s paperwork will go through faster than the other one’s, and it costs a lot of money to bring someone over.”

Although the family came to the United States to realize the American dream and find better opportunities for work and providing for one another, Lopez said it was difficult to have his family separated for that length of time.

“When I was first here, I used to call my brother who was still in Mexico at the time,” Lopez said. “I’d say ‘Oh man, if I could just go over there and get you, I would.’”

Although he had his papers to travel back and forth between the United States and Mexico and was able to visit his brother on special occasions, Lopez said he just wasn’t the same, and that having to leave his siblings behind was difficult when it was time to come back home.

“For some reason by that time, this (the United States) was now our home,” he said. “Going back was a vacation.”

While living in Dallas, Lopez started working in construction and roofing at the age of 16. The job took him on the road quite a bit, eventually taking him to Omaha, Nebraska. One of his brothers who had come to the states before him and had settled in Albert Lea insisted he make the short trip from Omaha to visit him. Lopez agreed, and when he arrived — to his surprise — things were a lot different from what he was used to in Dallas.

“Everything was totally different,” he said. “The community was different and Latinos were new in the area. It was like being the new kid in town and I thought, ‘Yeah, this is good.’”

Although he worried about leaving his friends in Dallas behind, Lopez gave in to his brother’s persistence to move to Minnesota and start a new life.

“I knew nobody there and I had friends in Dallas,” he said. “But I make friends so easily, so I said ‘OK, I’ll stay.’”

In 1990 he relocated to Albert Lea and took a job with Conagra Foods, where he would later end up meeting his future wife, Maria Hernandez. In 1993 he accomplished another American dream, and started his own business, Lopez Construction. For him, this was a major milestone in becoming an American citizen.

“It is a privilege that a lot of people do not have,” he said.

Seven years after arriving in Minnesota, Lopez moved on from Conagra Foods and began working for Wells Concrete, where he started out as a laborer, and is now a foreman. Although his days are long, working from 5 a.m. to 1 p.m. at Wells Concrete and then running his business — roofing, siding and working on home exteriors — when he is done, at the end of the day Lopez said it’s still the American dream that he and his family are proud to be living.

Over the next several years, he and Maria would marry and start another shared dream of having a family. Yet for Lopez, there was still one childhood goal he had not accomplished: becoming a soldier. In 2007 at the age of 35, he wasn’t sure if it was the right thing to do, but after the events of 9/11 and watching so many people he knew join, Lopez decided to swing by the Minnesota National Guard recruiter’s office in Albert Lea.

Now, 15 years later and one deployment to the Middle East in 2011 under his belt, Staff Sgt. Fransisco Lopez is deployed once more, this time with Delta Co., 2nd Battalion, 135th Infantry Regiment and Task Force Bayonet in the horn of Africa in support of Operation Enduring Freedom. The military has taken him to many places around the world, Lopez said, from Croatia to Norway, Kuwait, Iraq and now the horn of Africa.

Although being an immigrant has posed great challenges for him and many others — like learning a new language and cultural norms, and getting past the self-made roadblocks that come with the fear of not being able to meet all of the cultural expectations due to language and cultural barriers — Lopez said his time in the military and the outside perspective he has as an immigrant have given him many advantages.

“We (immigrants) sometimes can see opportunities more,” he said. “Sometimes we appreciate them more and we learn to adapt to what’s around us and work hard for those opportunities.”

His work ethic and drive to serve others has garnered praise from leaders who work with Lopez. Sgt. 1st Class Joshua P. Riviere, a platoon sergeant with Delta Co., said Lopez’s work ethic is second to none.

“He routinely assigns himself additional duties without seeking reward or recognition,” Riviere said. “He’ll accomplish tasks typically assigned to the platoon leader or platoon sergeant, so we have more time to accomplish other duties.”

Riviere said Lopez shows concern for his fellow soldiers and subordinates and that he ensures soldier issues are handled at the lowest level and monitors their welfare carefully.

“I would say he is the watch dog of the Platoon,” he said. “He is a role model to his soldiers, his family and his community. It is an honor to serve alongside him.”

With Hispanic Heritage Month having run from Sept. 15 through Oct. 15, Lopez said it is important for all people to take time to remember the significant contributions Hispanic Americans have made to the United States.

“We take for granted how many of us are actually in the military,” he said. “I would say that we should try to get to know people and what they have done for our country.”

Now that he has been in the United States for over 30 years, Lopez said he has learned to love many facets of American culture. While he still practices and enjoys various aspects of his Hispanic culture — like celebrations such as Dia De Muertos (Day of the Dead) and his favorite Mexican dish, carne asada — he embraces American traditions, especially a good American breakfast.

“There’s nothing like a good American breakfast,” he said with a smile. “The Tremendous 12 platter at Perkins is my favorite.”

For Lopez, being an American means being free, and doing something for your community and for your fellow citizens. For him, that obligation manifested itself into serving his country.

As for his dream for the future, Lopez plans to finish his career in the military and to retire early and return to one of his properties in Mexico where the skies are blue with his wife and youngest son.