Man sentenced to 35 years in prison for Waseca officer shooting 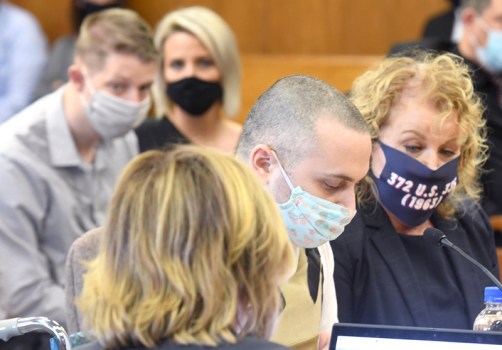 Waseca Police officer Arik Matson and his wife, Megan, listen as Tyler Janovsky reads a statement at his sentencing hearing Friday at the Waseca County Courthouse. Janovsky was sentenced to 35 years in prison in Waseca County District Court for shooting Matson in the head on Jan. 6 after officers were called to a suspicious person report. - Pat Christman/Mankato Free Press 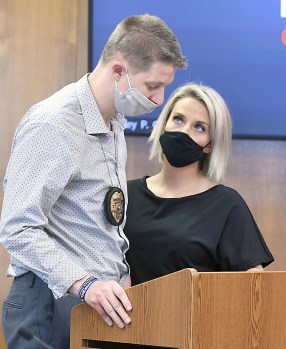 Waseca Police officer Arik Matson is steadied by his wife, Megan, as he reads a statement at Tyler Janovsky’s sentencing hearing Friday at the Waseca County Courthouse. Janovsky was sentenced to 35 years in prison in Waseca County District Court for shooting Matson in the head on Jan. 6 after officers were called to a suspicious person report. - Pat Christman/Mankato Free Press 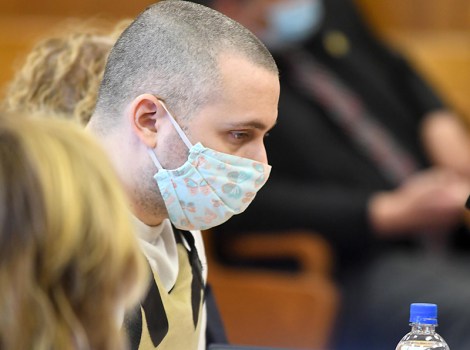 Tyler Janovsky listens to victim impact statements during his sentencing hearing Friday at the Waseca County Courthouse. Janovsky was sentenced to 35 years in prison in Waseca County District Court for shooting at officers and critically wounding Waseca Police Officer Arik Matson in the head on Jan. 6. - Pat Christman/Mankato Free Press 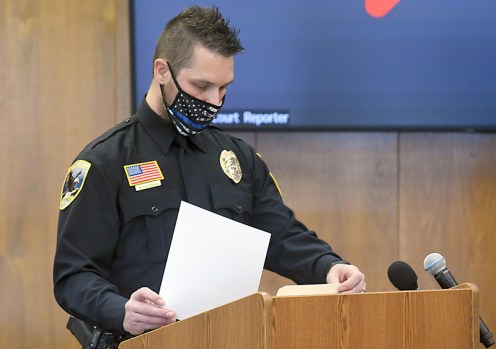 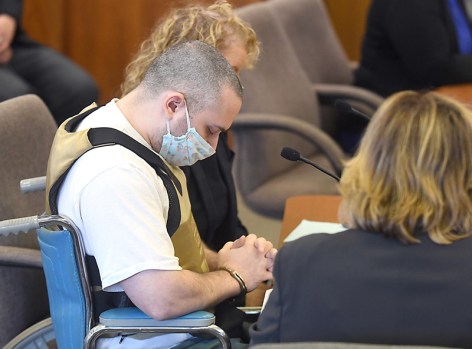 Tyler Janovsky bows his head as he sits in his sentencing hearing Friday at the Waseca County Courthouse. - Pat Christman/Mankato Free Press 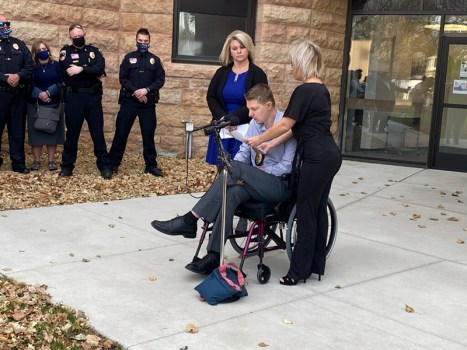 Arik Matson speaks Friday after the sentencing of Tyler Janovsky, the man who shot Matson while he was on duty in January. - Sarah Stultz/Albert Lea Tribune

WASECA — Ten months to the day after he was shot in the head while responding to a report of a suspicious person in Waseca, Officer Arik Matson stood in a Waseca County courtroom in front of his shooter and described to a judge how that day forever changed his life.

Matson, who was helped up to the podium by his wife, Megan, said he was covering a shift for a fellow officer the night the shooting occurred.

He doesn’t remember details of that night but he does recall waking up and being told he was shot while at work.

“It’s amazing how one day you can have everything, and the next day it’s gone,” he said.

The shooter, Tyler Robert Janovsky, was seated in a wheelchair wearing a bullet-proof vest and showed no emotion in the courtroom as Matson and others shared how they were impacted by the events of Jan. 6.

Matson, wearing his police badge on a chain around his neck, said he would still respond to that call if it were to happen again, though he acknowledged the challenges and frustrations he has faced in the months since he was shot, including time away from his family, missing important milestones and feeling tired. He said he has been grateful for the support he and his family have received.

“From this day forward, I choose to live life to the fullest, trust God’s plan and never take anything for granted,” he said.

Judge Christine Long sentenced Janovsky to the maximum 35 years in prison — 20 years in prison for one count of first-degree attempted murder for Matson and 15 years for a second count for fellow Waseca Officer Andrew Harren and Sgt. Timothy Schroeder. A third count was dismissed as part of a plea agreement. He will be required to serve two-thirds of the time in prison and the remainder on supervised release as long as he does not have any violations while in prison.

Janovsky issued an apology before the sentencing and said he hopes Matson fully recovers.

He had been on the run since the month before the shooting, when a Department of Corrections agent and a Waseca police officer went to conduct a probation check on him and he fled. While looking for him, they found equipment for making methamphetamine.

The night of the shooting, officers responded to a call of an unknown suspicious person with a flashlight in the backyard of a home on the 900 block of Fourth Avenue Southeast in Waseca. Four officers responded to the area, including Matson, and when they arrived, they found Janovksy on the back balcony of 904 Third Ave. Southeast. At one point, Janovsky fled from the balcony to the attached garage roof, where he ultimately exchanged gunfire with the the responding officers, according to court documents

The homeowners, Jack and Mary Williams, said a person’s home is supposed to be a safe haven, a place of comfort and safety, but Janovsky took that away from them.

Mary Williams said she and her husband were in the home talking to their son on the phone before they had to let him go and officers arrived.

At one point they went to the basement for shelter, where they hugged and prayed.

Eventually, they were told it was over, but for almost a full day officers were in and around their home investigating.

“What if police did not arrive as quickly as they did?” she said.

Waseca Police Chief Penny Vought said she and others in her department have wrestled for months with why Matson was shot. She described Matson as a good man — one of the kindest, most likable and easygoing men she has ever known.

“Any agency would be lucky to have him,” she said.

She described Janovsky’s actions as senseless, tragic, horrific, evil and appalling and said she did not think she would ever be able to forgive him for his deliberate actions.

She said Matson and his family have a lot of support and people will continue to support them into the future.

Harren said even though officers know they can encounter something like this on any shift, the shooting has “shaken the department,” and he is upset that Janovksy’s actions have hurt so many people.

Schroeder talked about the stress and flashbacks he has struggled with from the events that night that keep him from getting sleep and often alter his mood.

“Those shots ring out loudly every single day,” he said.

He often blames himself for not being able to protect his partner and questions his ability to protect others in his role as an officer.

Megan Matson said her husband’s healing has been a physical and emotional journey, and he is still in the process of relearning things he once knew that many take for granted.

While she is grateful he is now back home, his journey is far from over. She referenced a prayer she has found that is helping her move forward, saying she chooses to give their situation to God.

“We have found joy, and we will keep living,” she said.

Waseca County Attorney Rachel Cornelius highlighted the consequences of trauma that many have faced following the shooting, from Matson and his family, to the officers who were there firsthand, to the others who were at the hospital and the first responders, among others, noting it has been far-reaching.

Long also remarked about the impact the shooting has had on the community and commended those who shared how they had been affected by Janovksy’s actions.

“Your strength and bravery and resilience are remarkable,” she said.

After the hearing, Cornelius said while Janovksy was sentenced to the maximum available under law,  she hoped there could be changes to the laws in these types of cases — noting the law does not take into account officers who are gravely injured or who may never be able to return to work again.

“While we cannot change the outcome of what happened on Jan. 6, we are most thankful that officer Matson, Sgt. Schroeder and Officer Harren were not killed and that they are still here for their families,” Cornelius said. “Officer Matson has a long journey ahead of him, and we will continue to support him and his family every day.”

In addition to the time Janovsky will have to spend in prison, Long ordered restitution for $457,618 to the Waseca Police Department and said other requests for restitution could still be raised.