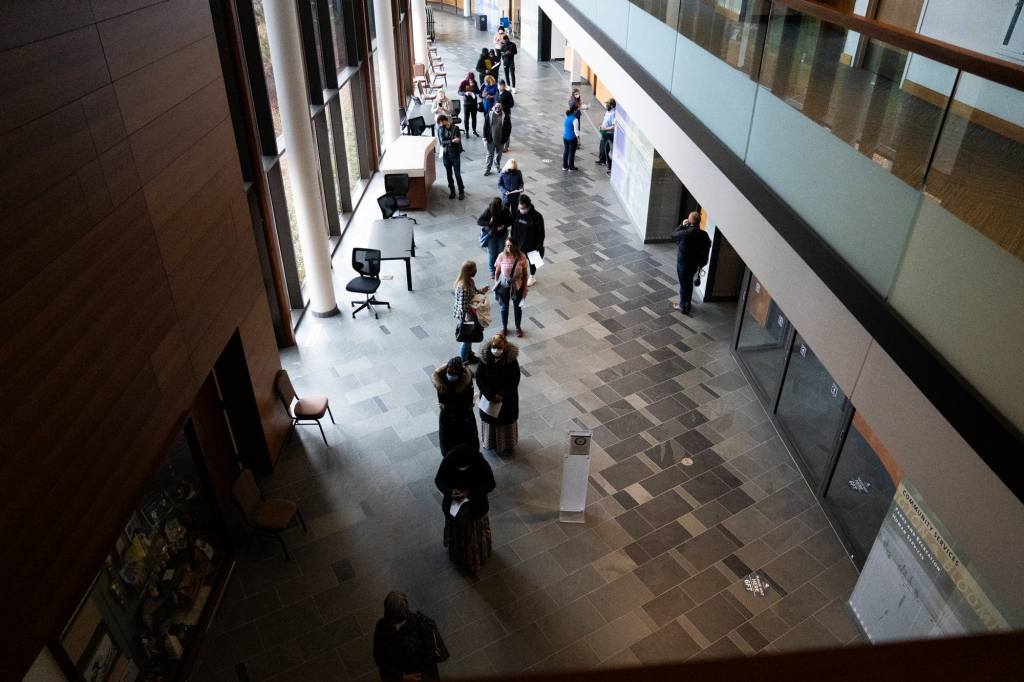 A line of residents waiting to vote early stretches through the Bloomington Civic Plaza on Saturday in Bloomington. Evan Frost/MPR News

After months of presidential campaign attention, nonstop political advertising and weeks of early voting, the end is in sight: Election Day is Tuesday.

It’s finally Minnesota voters’ turn to have their say on races at all levels of government — with the race for the White House at the top of the ticket.

Minnesota had a surprisingly tight finish four years ago, with Democrat Hillary Clinton edging Republican Donald Trump by about 45,000 votes of the 3 million cast.

JLee Blankenship of Spring Valley just turned 18 and is excited about her first-ever vote. She was part of an overflow crowd outside Trump’s airport rally Friday in Rochester — his fourth campaign stop in the state in the past few months.

“I’m going to vote for Trump and Republican all the way because they’re the only party this year that’s holding up our constitutional rights. I mean, the Democratic Party, all they are is socialists — their whole agenda,” she said.

Suzie Owens lives in Rochester, praises Trump’s style and wants him in the White House for four more years.

Catherine Swedberg of Edina has spent much of the last four years protesting Trump’s presidency, and was at a campaign appearance for Democratic nominee Joe Biden on Friday at the state fairgrounds.

She says Trump’s frequent Minnesota visits have done as much to motivate people who oppose the incumbent as those who support him.

“I think he’s doing a good job about that,” Swedberg said of Trump turning out Democratic voters. “That’s about the only thing that he does well.”

But like many Democrats, she’s not resting on polls that have the former vice president up on Trump in Minnesota and other key states.

“I will say that I don’t have the dread I was feeling close to the election four years ago, but I’m certainly not overconfident,” she said.

In Bloomington, Aaron Voyles voted for the Green Party’s candidate in 2016.

Almost 9 percent of Minnesota voters that year opted for someone other than Clinton or Trump. This time, Voyles is for Biden.

“I think there’s a lot of people that are really scared of what another four years of Trump would be,” he said. “I know I’m one of them.”

Mark Kersey, who showed up in Bloomington over the weekend to vote early, said he has conservative views. But he said the country needs a change in direction.

“To me, Trump is a little too far conservative,” he said. “He thinks too much of the economy and not of the people.”

Even the process of vote counting has been a source of concern late in this election.

A federal court ruling last week in a Republican lawsuit put Minnesota voters with absentee ballots on notice: If they don’t have them in by Tuesday night, they could be disqualified later. In other words, a seven-day cushion that state officials had set up for those ballots to arrive by mail could go away.

Bloomington’s Acting City Clerk Kris Wilson said that since the ruling, there’s been a surge in ballots dropped off at a collection site by people unwilling to risk a tardy vote. And there are other options available.

Spencer Mayne of St. Paul said he decided not to hassle with the absentee process. He’ll show up in person on Tuesday.

“It’s just right down the road from my house. I’m not too worried about the people in my neighborhood being super COVIDy. Everybody seems to be staying away from each other,” he said.

Aside from the presidential race, Minnesota will elect a U.S. senator, decide several closely watched races for the U.S. House and determine party control of the Minnesota Legislature for the next two years.