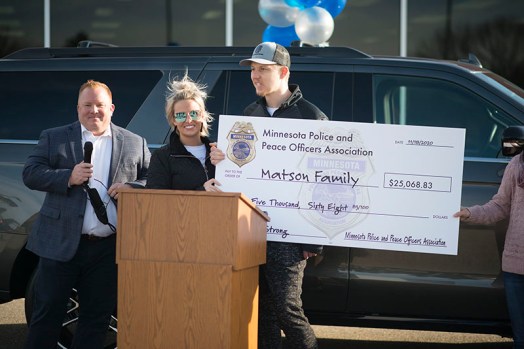 Arik and Megan Matson stand in front of their new 2020 Ford Expedition with a check for just over $25,000. The vehicle and check were given to the Matsons by the Minnesota Police and Peace Officers Association who set up a GoFundMe page to support Matson. - Tyler Julson/Albert Lea Tribune 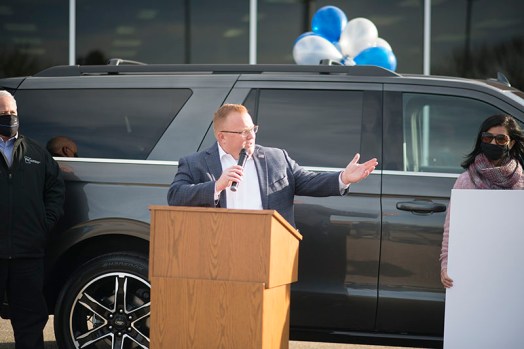 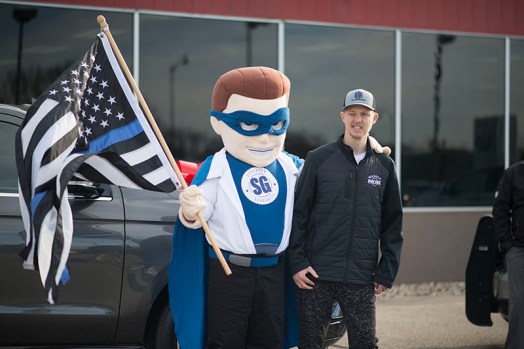 Matson stands with the Dave Syverson Ford Lincoln mascot before receiving a new vehicle and a check for just over $25,000. Tyler Julson/Albert Lea Tribune

In a GoFundMe campaign, the MPPOA raised enough money to pay for the new vehicle as well as donate any extra funds directly to the family.

Matson, who was critically injured after being shot in the head while in the line of duty in January, was on hand Wednesday, alongside his wife, Megan, to accept the vehicle and check.

Megan Matson took the time to thank the many people and organizations that gave money and resources in an effort to help the cause.

“We feel extremely fortunate to be surrounded by so many of you and words can not describe how thankful we are.” Megan Matson said.

MPPOA Executive Director Brian Peters said when he found out Matson would be coming home in October, he reached out to Megan Matson to see if there was anything they needed. When Peters found out the family currently had a Ford Edge with about 240,000 miles on it, he knew what to do.

The MPPOA started a GoFundMe page and within a matter of weeks, the page had raised $48,000. Peters said there were so many people who donated anywhere from $5 to $10,000. At that point in the fundraising, an anonymous donor contacted the Waseca Police Department and pledged to pay the remainder of the price of the vehicle; the family just needed to pick the one they wanted. The anonymous donor gave over $30,000.

The MPPOA updated its GoFundMe page with the news and said any additional funds raised would go directly to the family, which came to a total just over $25,000.

“Supporters of law enforcement came together in a tremendous way to support Arik and his family, as well as leaders at the Dave Syverson Ford Lincoln in Albert Lea,” Peters said. “We are so happy to have Arik on the road to recovery.”

Brandon Harmdierks, sales manager at Dave Syverson and close friend of Matson and his family, said it was an honor to be a part of the effort.

“It has been nothing short of amazing to witness the support, brotherhood and sisterhood of the law enforcement community through all of this,” Harmdierks said. “Excellent job to you all and what you do for all of us.”

Harmdierks said it was a privilege to work for a company that without hesitation contributed to the cause while also assuring the Matson family would not need to worry about any maintenance or repairs on their vehicle for years to come.

“Our family is blessed and thankful for the support of so many,” Megan Matson said. “Each day Arik gets stronger.”