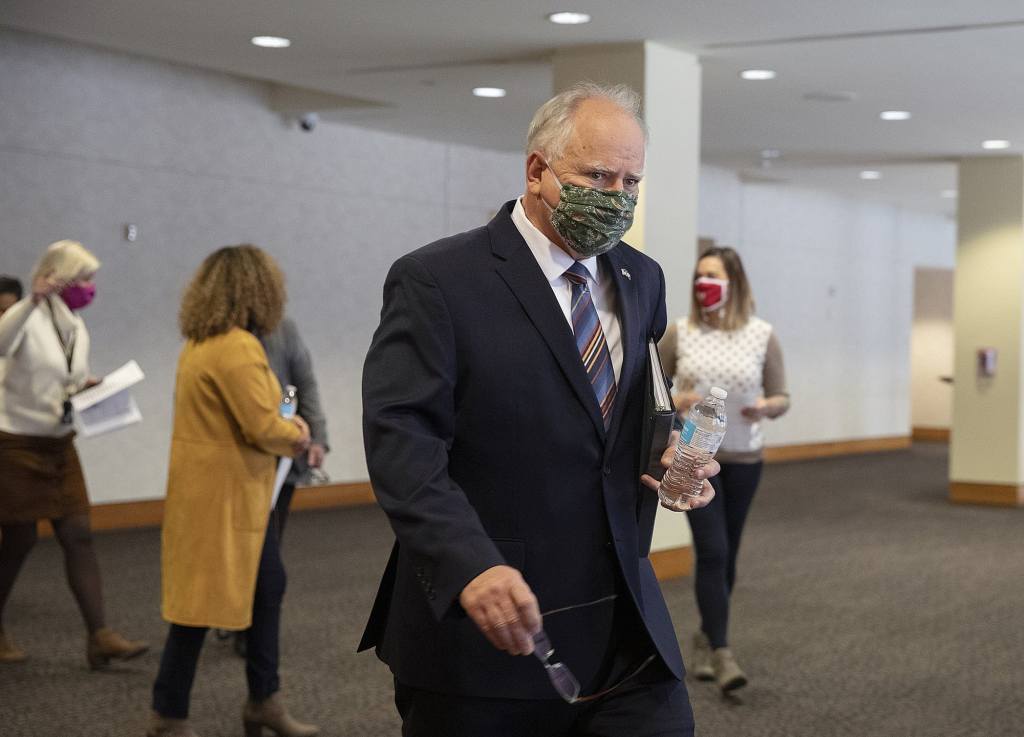 Gov. Tim Walz on Wednesday will roll out new curbs on Minnesota life intended to slow the current, uncontrolled spread of COVID-19.

He’ll announce plans to put high school sports — a staple of Minnesota life in the fall and winter — on hold.

The governor is expected to address the state at 6 p.m. on Wednesday.

The moves come amid a drumbeat of rising COVID-19 caseloads, hospitalizations and deaths.

The Health Department on Tuesday reported another 5,945 newly confirmed or probable cases of the disease, another high count following three days with nearly 24,000 newly reported cases; 26 more Minnesotans were reported to have died.

“None of this is easy,” Walz told reporters Tuesday.

The overall numbers continue to paint a troubling picture of a rapidly worsening outbreak in Minnesota not limited to just one region or demographic group, like earlier in the pandemic.

The seven-day trend in hospital admissions is at a new high. Hospitalizations have more than doubled in the past two weeks, placing more pressure on the state’s already stressed hospital systems.

More than 1,600 people are in Minnesota hospitals now because of COVID-19, with more than 300 needing intensive care.

Hospitals across the state are bracing now for waves of patients that will be coming soon.“It’s going to be a difficult four weeks,” Walz said.

Of the 236,949 confirmed or probable cases identified in the pandemic to date, about 79 percent have recovered to the point they no longer need to be isolated.

The deaths reported Tuesday raised Minnesota’s toll to 2,943. Among those who’ve died, about 68 percent had been living in long-term care or assisted living facilities; most had underlying health problems.

Tuesday’s numbers come a day after state officials pleaded with Minnesotans not to gather for Thanksgiving outside their immediate household. They also asked college students to consider not going home for the holiday.

That advice, laid out Monday, was a change from the state Health Department’s prior recommendations. The agency last week said it’d be OK for people to have gatherings up to 10 from three households.

“The ground is really shifting under our feet and we need to adapt quickly,” she said.

“It’s very risky right now to get together with friends,” Kris Ehresmann, the state’s infectious disease director said. “We strongly discourage travel over Thanksgiving break, especially if you plan to return to campus.”

New cases have been spiking the past two weeks in all age groups.

People in their 20s still make up the age bracket with the state’s largest number of confirmed cases — nearly 49,000 since the pandemic began, including more than 26,700 among people ages 20-24.

The number of high school-age children confirmed with the disease has also grown, with more than 19,000 total cases among children ages 15 to 19 since the pandemic began.

Walz said recently the state has data showing infection rates rising around bar and restaurant activity after 9 p.m. among young adults, noting that people who have the virus but don’t have symptoms are unwittingly spreading it.

The numbers led him to order new restrictions on late-night social life in Minnesota, including a 10 p.m. curfew for indoor service in bars and restaurants.

The fastest growing outbreaks are along the state’s western border with the Dakotas, where the virus is spreading unchecked. But new cases are rising at accelerating rates everywhere in Minnesota.

Northern Minnesota, once the region least affected by the disease, has also seen its caseload grow dramatically in recent weeks.

‘Darkest part of the pandemic’

The uncontrolled spread is being driven now by Minnesotans’ informal gatherings and get-togethers with family and friends where it’s transmitted unknowingly by people who have the virus but do not have symptoms, officials say.

“Our behavior is driving this … literally thousands and thousands of small decisions happening around Minnesota that are the issue here,” Malcolm said recently.

There’s increasing concern about the ability of hospitals to handle more. Staffing is becoming a challenge as more health care workers get sick.

COVID-19 is taking a toll on hospital staffing, making care more difficult to provide, even as demand grows. The trends indicate the situation will get much worse in the near future Malcolm told MPR News early Monday.

With COVID-19 raging now, Walz and public health authorities made it clear that the current situation is worsening as the virus runs largely unabated across the state. He signaled that more restrictions on daily life may be coming. That may include winter high school sports.

“It is no secret that the country, and especially the Upper Midwest, is in the grips of the darkest part of this pandemic,” Walz told reporters Monday.

While the governor expressed hope of a “light at the end of the tunnel” amid news of effective vaccines on the way, he acknowledged the grim counts will continue.

Walz called on Minnesotans to take personal responsibility for helping stem the disease’s spread, noting that Minnesota will soon pass 300,000 total cases and 3,000 deaths in the pandemic. “That will not be the end. The only question is how bad does it get.”

Tuesday’s briefing with Walz included a number of Minnesotans directly affected by the pain of COVID-19.

That included ex-GOP state Rep. Nick Zerwas, who ended up hospitalized in an ICU with the disease.

“I was stunned when I became so overwhelmed and ill from this virus,” said Zerwas, who also has a severe heart condition. “It happened so quickly and it progressed so fast. Two weeks ago I didn’t know a soul in Sherburne County that tested positive,” he said, adding he now knows 40.

“At no time will this virus ask you who you voted for or what your politics are,” he said. “It does not discriminate, and it is mean. We all have to come together and fight.”

Zerwas, in a weak and raspy voice, admitted he downplayed COVID-19 before contracting it back in the summer but that circumstances have changed completely since then.

He said the situation in June and July was “nothing, absolutely nothing” like it is now. “Everything has changed. The virus is here. If we don’t act now, God help us.”