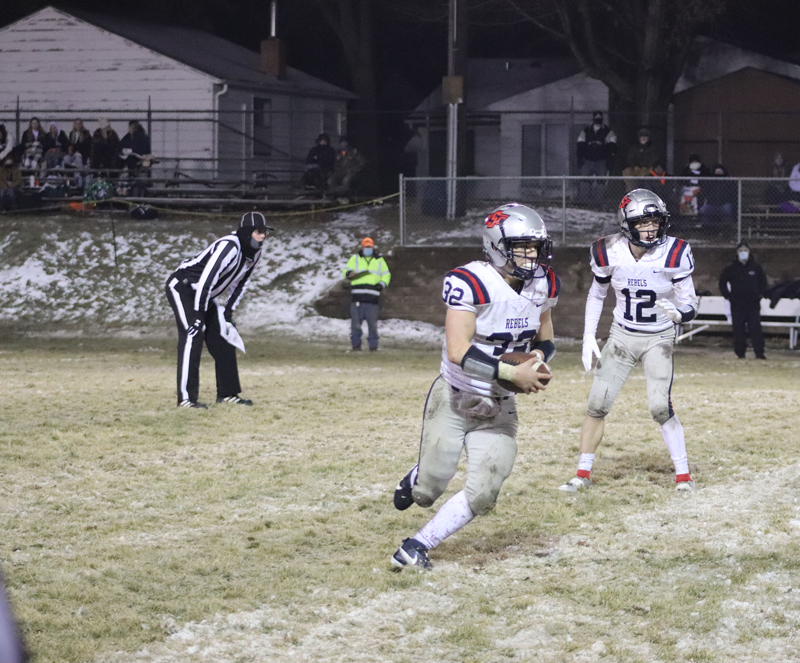 Jackson Spizzirri runs with the ball in the game against Waterville-Elysian-Morristown Wednesday night. Spizzirri scored one touchdown in the Rebels’ 42-6 victory over the Buccaneers. - Photo courtesy Heather Goldman/South Central News

WATERVILLE  — The United South Central football team closed out the regular season Wednesday night when it hit the road to take on Waterville-Elysian-Morristown in a Mid Southeast Conference battle.

The Rebels leaned heavily on the play of quarterback Ethan Dallman, who threw for 174 yards and four touchdowns in the 42-6 rout of the Buccaneers.

The Buccaneers were the first team to get on the board, scoring their lone touchdown of the game on their second possession. The Buccaneers scored on a two-yard run, but came up short on the two-point attempt afterward.

The Rebels answered back with a touchdown of their own on their next drive. Dallman dropped back from the six-yard line and found Riley Staloch at the one-yard line, who ran it in for his first touchdown of the night. Dallman scrambled into the endzone on the two-point conversion to take the lead 8-6.

United South Central scored two touchdowns in the second quarter, the first of which came on a 51-yard pitch and catch from Dallman to Jackson Spizzirri. The second came in the closing minute of the quarter when Dallman tossed his third touchdown of the game to Staloch for his second score, to make it a 22-6 game at the halftime break.

The Rebels came out in the second half and all but put the game away by scoring touchdowns on their first two drives. Dallman connected with Staloch once again to go up by three scores. They followed it up with a 26-yard touchdown rush by Colten Quade to make it a 36-6 ballgame.

United South Central wasn’t quite done just yet, as Jon Martinez connected with Brendan Drescher for a 56-yard score in the fourth quarter.

The Rebels improve to 2-4 this season and will play again Tuesday in the first round of the Section 2A tournament. As of press time, it was unclear who the Rebels would take on.