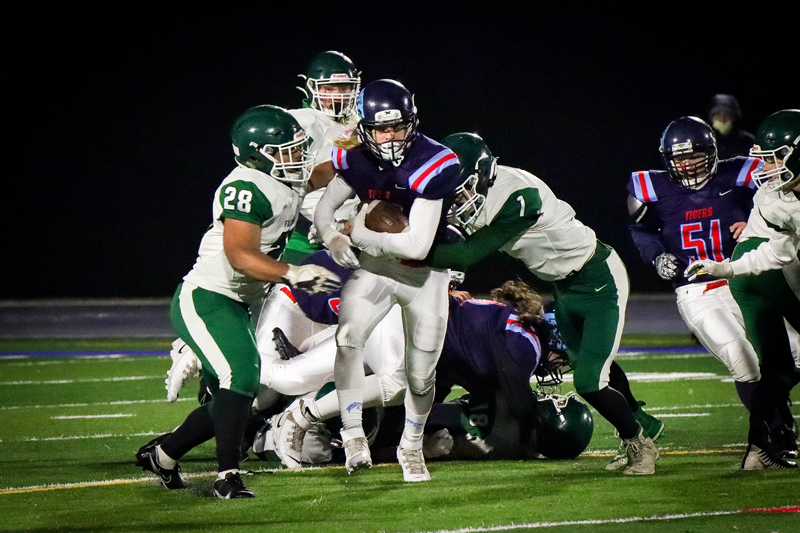 After nearly a month-long break due to recommendations by the Minnesota Department of Health, the Albert Lea football team finally hit the field Wednesday night, playing host to Faribault.

Unfortunately for the Tigers, the break didn’t do them any favors as their offense struggled to move the ball. They kept the score close with the Falcons early on, but two quick touchdowns at the end of the half put the Falcons up big. In the end, the Tigers came up short 47-6.

Albert Lea started the game with the football and was forced into a quick punting situation. However, the Tigers caught a break after picking up a blocked punt and moving it forward deep into Faribault territory. Four plays of no gain gave the ball back to Faribault after an Albert Lea turnover on downs.

The Falcons marched down the field on their first possession and punched the ball into the endzone on a seven-yard touchdown run to cap off the drive. The Falcons led 8-0 after a successful two-point conversion.

Sophomore Dakota Jahnke entered the game at quarterback for the Tigers, replacing senior Cody Yokiel. The Tigers were forced into another punt after a dropped pass in the open field.

Faribault extended its lead on the next drive after a 30-yard pass found the mark and a two-point conversion made the score 16-0 with just over four minutes left in the first quarter.

Senior Pierre Curtis and junior Cole Janssen caught a couple passes for the Tigers on their next drive, but were once again forced to punt after the drive stalled. 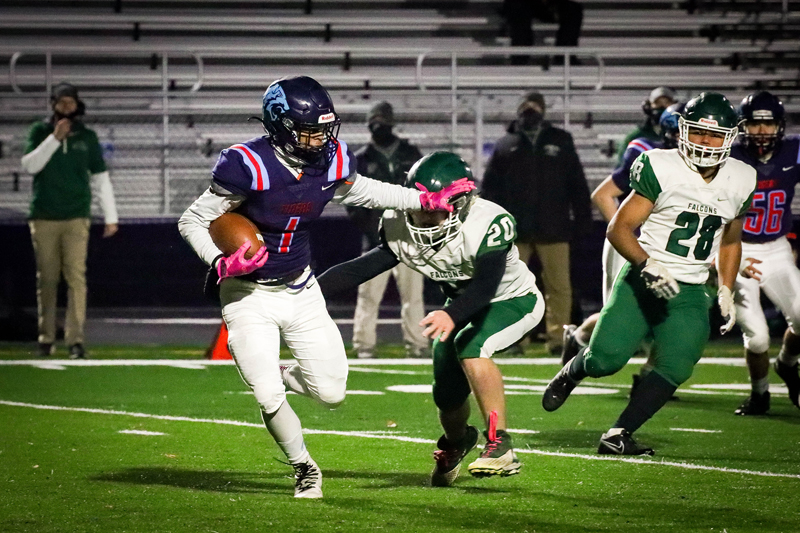 Senior Pierre Curtis runs with the ball Wednesday night in the regular season finale. Curtis caught a 50-yard pass that set up the Tigers only touchdown of the game. – Laura Mae Photography/For the Albert Lea Tribune

A nice punt return by the Falcons gave them the ball inside Tigers territory, but the Tigers got their first stop on defense by forcing a turnover on downs four plays later. The Tigers started the ensuing drive at their own 42-yard line, but punted after a three-and-out.

The first quarter came to an end on the Falcons’ next possession with the Tigers trailing 16-0.

The Tigers were called for defensive pass interference to open the second quarter, which led to a four-yard touchdown by the Falcons.

Albert Lea scored its first touchdown of the game on the next drive after a big play from Curtis, who caught a 53-yard pass from Jahnke, taking the ball to the six-yard line. After a loss of yards on the next play, Cole Glazier ran for an 11-yard score to close the Faribault lead. A blocked PAT put the score at 24-6.

Both teams traded turnovers back-and-forth over the next possessions before the Falcons pushed in another run, going 14 yards for the touchdown. An interception by the Tigers gave the ball back to the Falcons in prime field position and they scored another quick touchdown to make it 40-6 heading into the break.

The Albert Lea defense played better in the second half, holding Faribault to just one touchdown in the third and scoreless in the fourth. However, the offense could not find any momentum, stalling on many of the drives in the second half.

The clock continued to run in the fourth quarter as the Tigers dropped their third game of the season.

The Tigers fall to 0-3 on the season. Due to the high school transitioning to distance learning starting Nov. 18, it is unclear if the Tigers will play another game this season. The decision is likely to be made soon as the first round of section play starts Tuesday.