Voters head to the polls as Election Day finally arrives 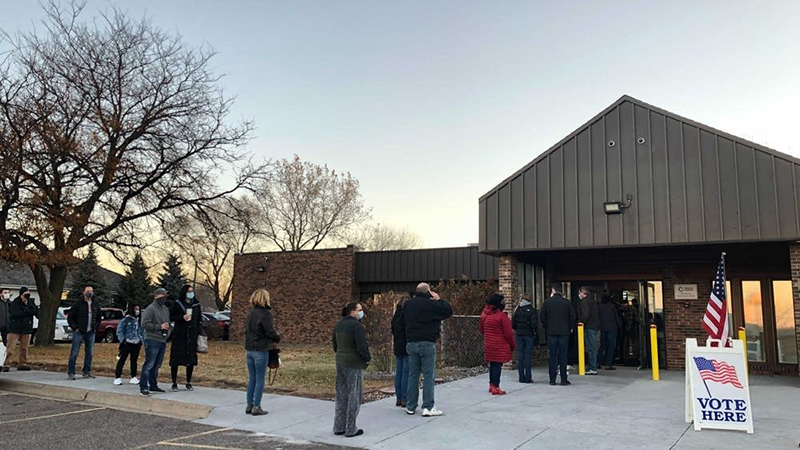 Voters were lined up to vote early in some locations across the state. - Photo courtesy MPR News

Minnesotans head to the polls Tuesday to elect a president and a U.S. senator, decide several closely watched races for the U.S. House, and determine party control of the Minnesota Legislature for the next two years.

Alicianna Ruiz was in line early in Blaine.

“I want to make sure my voice matters, my vote counts,” Ruiz said. “It definitely a different type of environment in this election. You know there have been one or two where I haven’t voted. I’ll never make that mistake again.”

For many Minnesota voters, their Election Day has already come and gone — more than 1.8 million have already cast their ballots, according to Minnesota Secretary of State Steve Simon. That represents 62 percent of all votes cast in 2016.

As of Monday night, about 297,500 absentee ballots, and ballots from mail-only precincts, had not yet been submitted, though some of the remaining unsubmitted ballots could have been in transit or they could belong to voters who have decided to vote in person on Election Day instead.

The fate of in-transit ballots was thrown into doubt by a recent federal court ruling that said tardy ballots — ones postmarked by Election Day but arriving after Tuesday — could eventually be removed from vote totals. Officials must segregate ballots that come in late pending additional litigation.

“We’ll do as the court has ordered and segregate the ballots,” he said. “But we are going to count and tally every last vote for every last office.”

While Minnesota isn’t considered a critical swing state, it has received plenty of presidential attention this year.

The state had a surprisingly tight finish four years ago, with Democrat Hillary Clinton edging Republican Donald Trump by about 45,000 votes of the 3 million cast.

It’s given Republicans hope of snapping Minnesota’s long Democratic win streak at 11 consecutive presidential contests in the blue column. Democrat Joe Biden has visited the state twice during the campaign this fall, while Trump has held several large rallies in Duluth, Bemidji and Rochester.