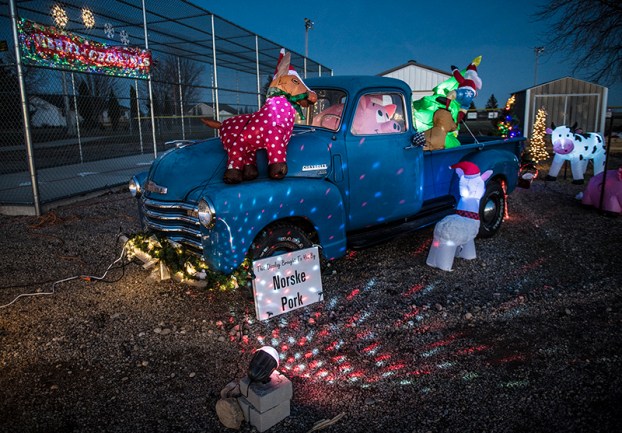 The drive-thru lights display at Leonard Fjelstad Sports Complex in Lake Mills will be on nightly through December. - Colleen Harrison/Albert Lea Tribune

LAKE MILLS — In its second year, a drive-thru lights display in Lake Mills has tripled in size while trying to bring holiday cheer to area residents.

“I think after seeing what we were trying to do last year, many more businesses felt inspired to participate this year,” Johnson said. “There was definitely more excitement in year two.”

She said community attendance in year two increased as well, with over 5,000 people claiming interest in the online lighting ceremony event on Facebook. When the display first turned on Nov. 28, Johnson said there was a steady stream of cars, sometimes lined up all the way back to Highway 105, for a solid two hours. She said the hot cocoa from Swallow Coffeehouse ran out in nine minutes, and more couldn’t be brought back because of the long line heading into the display.

“Growing pains, I suppose,” Johnson said. “It was a fun night.” 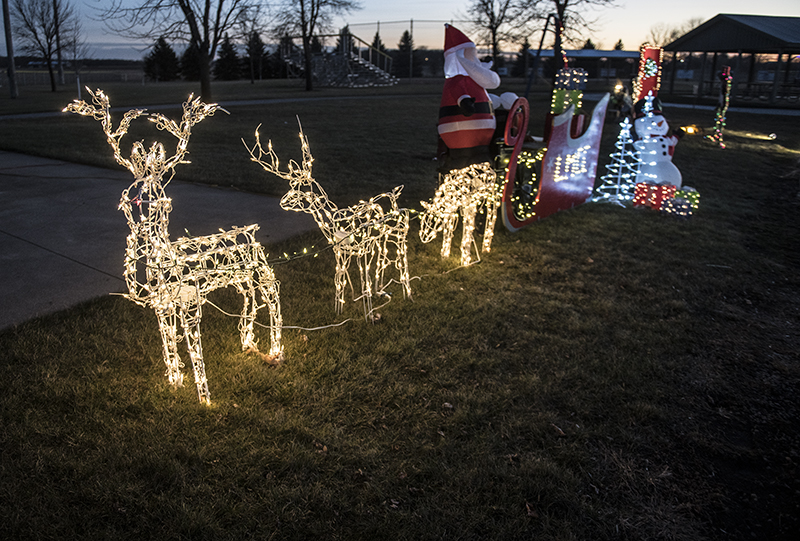 There will be a Christmas lights cruise starting at 5 p.m. Dec. 12 that will include the display as a stop, along with entries into the residential Christmas lights contest. – Colleen Harrison/Albert Lea Tribune

“Our goal is to grow into an event that can be utilized to support itself and local organizations financially, but also, on a betterment level, we want to give people something to enjoy during the holiday season,” Johnson said. “So many are putting a hold on normal traditions this year with the pandemic, and we are just hoping to fill in some of those empty spaces.”

The Lake Mills drive-thru lights display will be open and available nightly throughout December at Leonard Fjelstad Sports Complex in Lake Mills. There will be a Christmas lights cruise starting at 5 p.m. Dec. 12 that will include the display as a stop, along with entries into the residential Christmas lights contest. The Winnebago County 4-H Logan Loganeers will collect food bank donations at the drive-thru display during the cruise. More details, including a route map and voting ballots, will be released by the Lake Mills chamber as the event approaches.

“We are so grateful for the businesses who participated this year — we literally could not hold the event without them,” Johnson said. “I hope they had as much fun creating their displays as we did viewing them on opening night.

“Christmastime is such a magical time and we want to help build and provide a little boost to the community’s holiday spirit. Maybe attending the drive-thru light display will become a family tradition for people.”