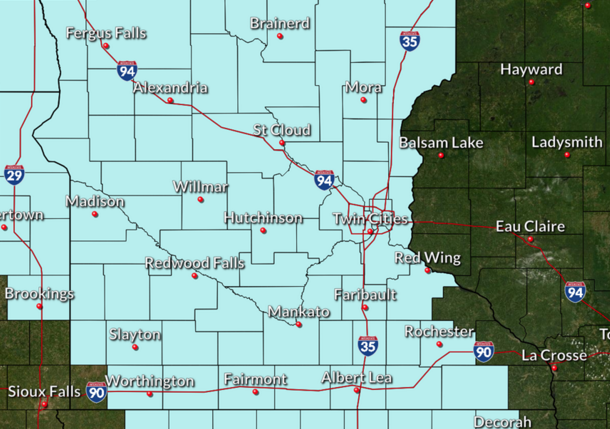 Much of the state is under a wind chill advisory through noon Thursday. Image courtesy National Weather Service

Albert Leans are waking up to a fresh blanket of snow just in time for Christmas as bitter cold wind chills linger over the area.

Much of the state is under a wind chill advisory until noon with wind chills as low as 35 degrees below zero in some areas.

According to the National Weather Service, the dangerously cold wind chills could cause frostbite on exposed skin in as little as 10 minutes. People should use caution while traveling outside, and wear appropriate clothing, including a hat and gloves.

While the blizzard warning has expired, many roads in the area are still listed as partially covered or fully covered with snow, according to the Minnesota Department of Transportation. Interstate 35 from the Iowa border through Ellendale is listed as dry pavement, while Interstate 90 on both sides of Albert Lea has at least some layer of ice.

Interstate 90 west of Wells has reopened to the South Dakota border after closing during the worst of the blizzard Wednesday.

Blizzard warnings were posted in the region as National Weather Service officials said winds gusted up to 60 mph.

The Minneapolis-St. Paul airport experienced about 300 flight cancellations and 40 delays as of Wednesday afternoon, airport spokesman Patrick Hogan said. It was expected to be the third busiest day of the Christmas holiday travel period, behind this upcoming Sunday and Saturday, he said.

Friday is expected to be slightly warmer with a partly sunny forecast and temperatures near about 20 degrees.