Arlen Spencer Legred was born to Thomas and Marie Legred in rural Brush Creek on January 19, 1933. He lived most of his life in the Brush Creek area, with the exception of 2 years in Killen, Texas, while he served as Corporal in the Army. 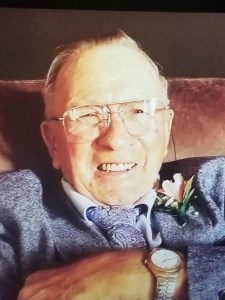 He grew up farming with his brothers and caring for his little sisters. He was a hero at the age of 10 when he carried out his younger siblings from an early morning house fire. He loved to share stories with his grandchildren and great-grandchildren about crop and pig farming. Arlen was proud to be a farmer and loved to remind everyone that he drove a combine until he was 85- even surviving a combine fire at that age. Thanks to Kevin and Lon he was able to stay on the farm and help in any way he could.

Church was another essential part of his life where he was proudly baptized, confirmed, married and attended North Blue Earth. He was the official self appointed church greeter to visitors, loved seeing and hearing the little ones- even encouraging their chatter and laughter throughout the service. He also mentored several confirmands and thoroughly enjoyed the time spent with these kids too.

Another love was softball and volleyball- specifically his Brush Creek teams. He would brag often that he was able to play softball well into his 50s. Whether you were on his team or the enemy, as he fondly referred to you, he loved you no matter what. He was a fan of the Braves, Warriors, Rebels, Bucs, Zephyrs, and Raiders. He loved cheering on the Braves with his friends Darrel and Carl. He was a member of several boards throughout his years including: Bricelyn School, Bricelyn Elevator, North Blue Earth Church, Bricelyn Legion, St. Luke’s, 4-H Federation, among others.

Another summer event Arlen couldn’t miss – the Faribault County hog show which he was a part of for over 70 years. He loved announcing, seeing the staff, the ring help, and all the kids that worked hard to show their pigs.

He loved to roll dice and drink his coffee in the morning with the guys at the Brush Creek Store, the Log Cabin, or Bud’s Cafe. You were never a stranger to Arlen- he welcomed you and of course encouraged you to shake dice with the crew.

He may not remember a name but he never forgot a face. Whether he met you at a ball game, church, or meeting he would always have a conversation with you and welcome you with open arms. Even with all of these friends that Arlen met- once you met him you were a friend for life, he still cherished his family above all else. He spoke with love and pride with anyone that would listen about his children, grandchildren, or great grandchildren’s accomplishments. Not to mention his pride in his nieces and nephews and anyone else in the Brush Creek area. He was called the Mayor of Brush Creek and wore that honor with pride.