Behind the scenes, a flurry of activity as hospitals prep first COVID-19 vaccine 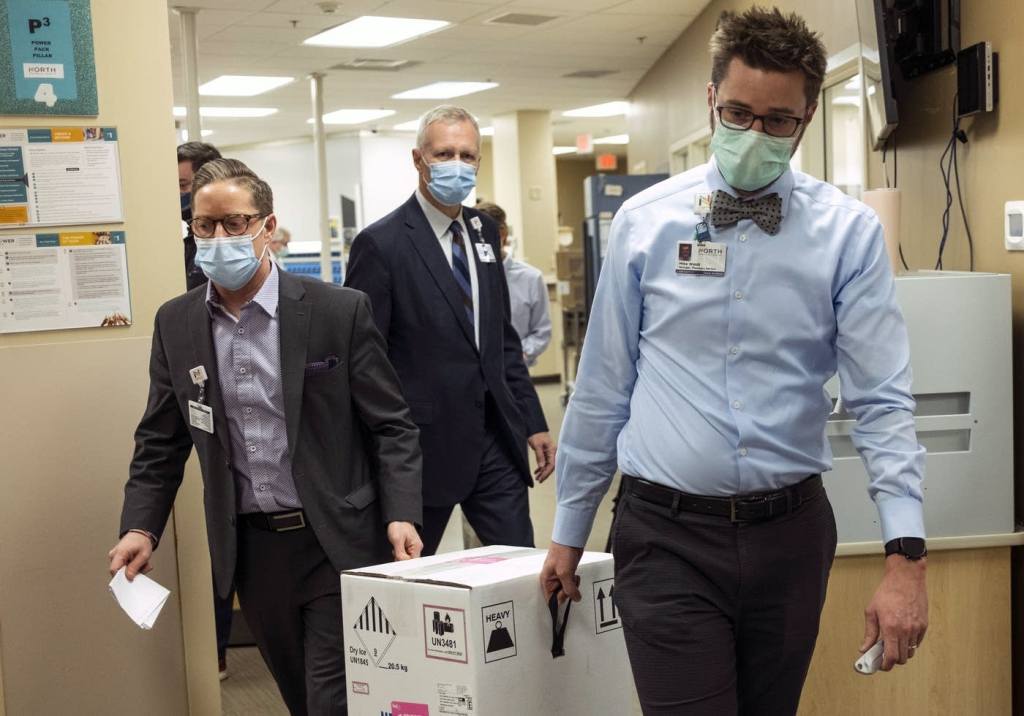 Around dawn on Tuesday, Paul Krogh and his colleagues at North Memorial Health greeted an important package at their Minneapolis hospital’s loading dock: A single box containing 975 doses of the game-changing Pfizer coronavirus vaccine, ready to be given to hundreds of the hospital’s front-line workers.

With so much hope riding on the creation and approval of vaccines meant to halt the spread of COVID-19, hospital officials say watching that first batch of shots arrive on their doorsteps has been a huge relief.

But the work of administering those first vaccines is just beginning.

Around the state, hospital staff and their public health and emergency preparedness partners are in the midst of a frenzied and complicated logistical dance, fine-tuning the details of how and when the first front-line healthcare workers will get their initial dose of the two-dose vaccine.

Those first shots will be given to staff who are at the highest risk of contracting COVID-19 on the job: emergency room and intensive care unit workers, and others directly caring for COVID-19 patients. By inoculating staff who are most exposed to the virus, hospitals and public health experts are hoping to cut down on the staffing crunches that have made it challenging to care for COVID-19 patients when cases spike.

At Mayo Clinic in Rochester, those preparations have included the last-minute construction of a vaccination clinic, where roughly 2,400 emergency room, ICU and other staff will be vaccinated as early as this week.

It’s not your average vaccination clinic, said Dr. Melanie Swift, who is helping lead Mayo’s vaccine rollout. There’s a place where the vaccine can be prepared — doses must be thawed and mixed with saline before they can be administered — as well as 17 stations where staff can get their shots, and a space where vaccine recipients can linger, to be observed for adverse reactions afterward.

The process, Swift said, will be highly choreographed.

“This all has to be done with social distancing,” Swift said. “You have a very clear direction of flow so people aren’t crossing back. You have to space out the observation area so people aren’t sitting close together.”

Across town on Rochester’s east side, similar preparations are underway at Olmsted Medical Center, where the very staff who will get the vaccine first are being educated on the vaccine’s effectiveness, safety and potential side effects.

The hospital’s operations and emergency preparedness director, Tom Graham, said staff members have had a lot of questions — about side effects, reactions, and whether or not they might develop COVID-19 if they get the vaccination.

On top of that, managing the scheduling logistics for three major hospital departments — Olmsted Medical’s emergency room, intensive care unit and birth center staffers will be first in line for the shot — is no small task. Organizers need to ensure that staffers from the same department aren’t scheduled in groups — if several people from the same team have reactions to the vaccine at the same time and need to recover, it could create an unintentional staffing crunch.

But there’s also the question of making sure people show up to get their first and second doses on the right day at the right time, because both doses, administered almost a month apart, are critical to the vaccine’s effectiveness. The hospital’s vaccine coordinators are trying to make things as simple as possible for vaccine recipients.

In the Twin Cities, metro regional health preparedness coordinator Jonathan Bundt has been helping hospitals and other providers prepare for the vaccine’s arrival.

He says that critical details about the Pfizer vaccine — whether it’s safe for pregnant women, for instance, and how long providers should monitor patients for adverse reactions —  weren’t available until the U.S. Food and Drug Administration issued the vaccine’s emergency use authorization over the weekend.

And that’s meant that the required training for the people administering the vaccine — on how to store and deliver those shots to their intended recipients — wasn’t fully ready until this week.

That’s raised some complaints from some health care workers, eager to get that first dose. But Bundt said now is not the time to cut corners or skip crucial training.

“If we deliver vaccine and it sits out in the open too long and becomes non-effective, you’re putting vaccine into people that won’t work,” he said. “So the training is part of this.”

Complicating these preparations is a complicated vaccine: The Pfizer shots require special handling and storage — and, therefore, special training. This vaccine, he said, is unlike any other that health care providers might be used to administering.

“Someone who has vaccinated your whole career will still need to do this training because it’s different,” he said.

Back at Mayo, Swift said the hospital is doing that training, and aims to begin vaccinating staff early next week.

But she also said there are lingering concerns that Mayo won’t be able to vaccinate its staff quickly enough.

“That is the question of the hour,” she said

That concern comes down to numbers: The state of Minnesota gets its vaccine shipments from the federal government, which allocates vaccines based on a state’s population, not on the number of healthcare workers there.

But in Minnesota, the number of healthcare workers number in the tens of thousands, between the Mayo Clinic network in the southeastern part of the state and other large systems in the Twin Cities. And Swift worries the state’s early allocations just won’t be enough.

“We’re a little nervous about that. We don’t yet know if the state is going to be able to supply vaccine as quickly as we would like,” she said.

Vaccines have already arrived in some locations around the state, including at the Veterans Affairs medical center in Minneapolis and on some Native nations through the federal Indian Health Service. Because they are federal government entities, both the VA and the IHS are receiving their vaccine shipments — from a separate pool and on a slightly different timeline than states — directly from the federal government and are already administering them to people in their system.

Swift says that in the best-case scenario, Mayo expects all of its staff will be vaccinated by February.