Bringing the ‘Icon of a Revolution’ to George Floyd Square 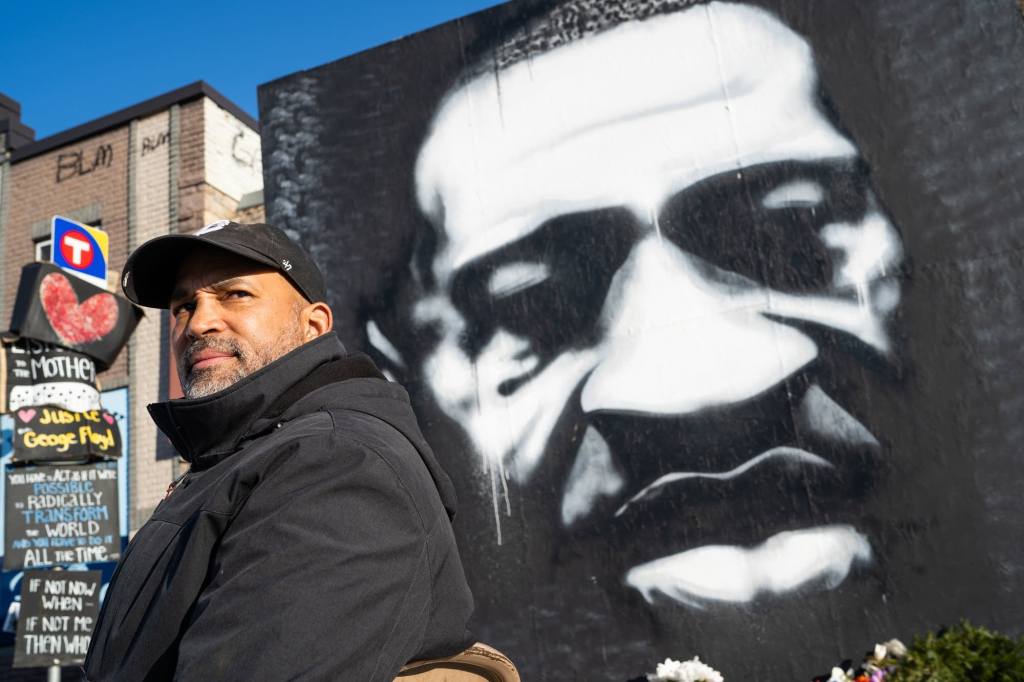 Artist Peyton Scott Russell in front of "Icon of a Revolution," his portrait of George Floyd, in Minneapolis on Dec. 12. Evan Frost/MPR News

Editor’s note: This is part of a monthlong series looking at how the community has transformed the site of George Floyd’s killing — 38th Street and Chicago Avenue in Minneapolis — and at the people behind its transformation. It is the culmination of reporting over several months, and a partnership with South High School to engage neighborhood youth in telling their community’s story.

Peyton Scott Russell’s “Icon of a Revolution” is a huge portrait of George Floyd’s face in shades of grey, black and white spray paint. A single tear drops from the corner of his eye. This 12-by-12-foot plywood structure is mounted on two-by-fours and looms over the space in the square and is a beacon for visitors to stop and take pictures.

“So it’s basically a street corner that’s been made into a shrine,” Russell said. “Everywhere you look, people have created something that reflects the current moment, the actual spot where George was murdered, there’s flowers with notes and trinkets and things that just reflect people’s offerings. Everyone in Minneapolis processed George Floyd’s death differently.”

After the killing, the artist said people rushed into his studio to tell him what was going on in south Minneapolis.

“I sat down and watched the entire thing. … I actually grew up on this corner, 38th and Chicago. Phelps Park is a block south of here, that was my childhood park. So this particular corner has a very special place in my heart,” Russell said. “The other thing was, there was a resemblance towards my father on George Floyd, a very dark-skinned Black man. That’s who my dad is, as well. And just see how he was taken out, just really hit me on a visceral level.”

Russell describes himself as a graffiti writer and a street artist, not a protest artist, but the summer’s events have altered his thinking about the role of art and the movement for racial justice.

“Now, by this time, the curfew had been in place, the city was smoldering, you know, riot cops everywhere. And I painted [the portrait] during the night. The next day, we loaded it up on the trailer, and drove it into position. And so 30 people that were all crowded around the square, everyone just came over and it was just a huge collaboration, sort of like this community effort,” Russell said. “Everybody grabbed a corner or a piece of it and pulled it off the flatbed and walked it into place. It’s about 5 to 10 yards from where he was murdered. And here it sits. Now it’s this sort of international icon piece that kind of represents this corner and what happened.”

“Because of what happened over the summer, I realized how powerful artists are even more so than I had before. And how we actually shape communities, we shape opinions and ideas. We are the storytellers, the artists that have created pieces here, really provide understanding, we provide comfort,” he said. “So I think what’s happening in the square here, people get to come here and they get to reflect, they get to contemplate, they get to dream and you know, also attach their own opinions and their own ideas of how they’re feeling. And so I think people look towards the artists to provide that understanding.”

“This is a corner where artists of color can begin to express those kinds of opinions. People actually spend time here and really see and feel what we’re saying, which really hasn’t been done before,” said Russell.

In the few short months, the piece has drawn viewers from around the country. Though well known, as a street installation Russell expects the artwork will deteriorate. But the memory of Floyd continues to inspire people to action. Russell said it’s important for visitors that come to the square to be respectful.

“The biggest thing to keep in mind is the generational pain that our communities have gone through and to have that kind of respect in your heart when you come here,” he said. “I think white communities really need to think about how they are the only people that can change racism. It’s the white community’s problem.”