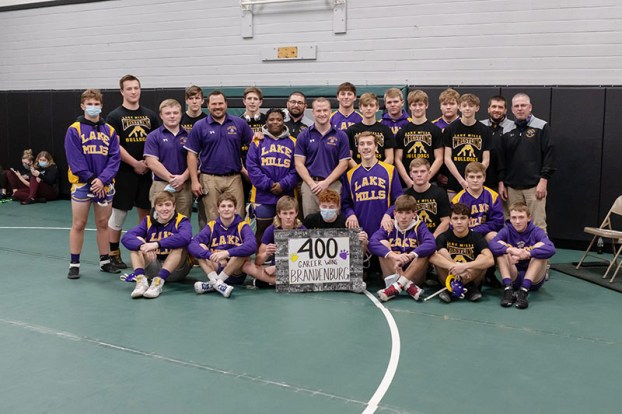 Lake Mills wrestlers traveled to Swea City Thursday night for their second Top of Iowa Conference quadrangular of the season.

In the opener, Saint Ansgar was the opponent, and the Bulldogs came away with a 63-18 victory. This was followed up by another quick 78-6 win over North Union.

“We racked up a lot of pins in the first couple duals,” said coach Alex Brandenburg. “It is important our wrestlers continue to work on getting better just like they did tonight.”

The nightcap pitted two squads that were undefeated in duals on the season. Lake Mills controlled the dual throughout and came away with an impressive 54-15 win.

“The team looked exceptional against Central Springs,” Brandenburg said. “Our conditioning and technique have come a long way since the first meet.”

With the wins, Lake Mills improved to 10-0 on the season.

In the second dual of the night, Brandenburg reached the 400 win mark for his career. It was fitting place for Brandenburg as the win came seven miles away from the acreage he grew up on between Swea City and Armstrong. His career record is now 401-86.

“Coming to Lake Mills was the best decision I ever made,” Brandenburg said. “I have been blessed to have great assistant coaches, wrestlers, managers, parents and fans. It has also helped having such a great youth program.”