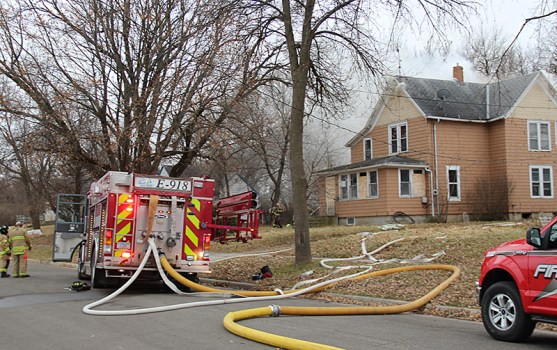 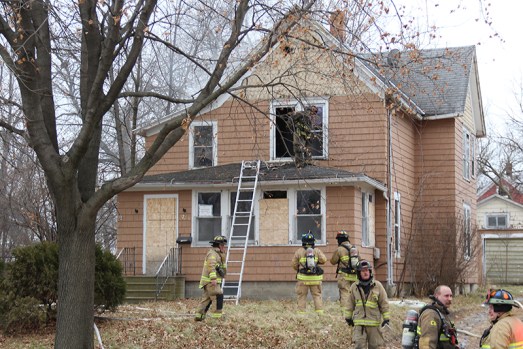 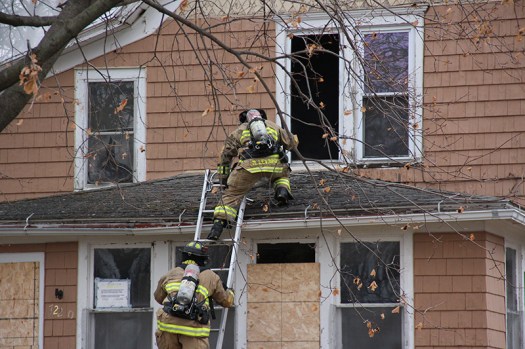 Firefighters climb onto the roof of a porch and into a second-story window at 720 S. Washington Ave. while battling a fire Friday morning. Sarah Stultz/Albert Lea Tribune

Authorities received a report at 7:55 a.m. of smoke in the area of South Washington Avenue and Front Street. When firefighters arrived, a person directed them about a block south to a house at 720 S. Washington Ave. that had smoke coming from it, according to a news release.

They found a two-story vacant home with smoke coming from multiple floors and the attic.

The release stated fire crews worked to extinguish the fire and were at the scene for about four hours putting out hot spots.

Two firefighters were injured, one of which was treated by Mayo Ambulance crews at the scene. The other firefighter was not treated.

The Fire Department stated the home sustained significant damage, but there were no contents in the property. The house had previously been placarded by the city as unfit for human habitation.

The release stated the fire was found to have started on the first floor living area, though the cause at this time is undetermined.

Albert Lea firefighters were assisted by the Minnesota State Fire Marshal’s Office with the investigation.