A Facebook livestreamed visitation will be held for Franklin E. “Frank” Ostby, 78, of Winfield from 10:00am till 10:30am on Tuesday, December 22 from the Kimzey Funeral Home in Mt. Pleasant. (https://www.facebook.com/KimzeyFuneralHome) Due to COVID, a family only funeral service will also be livestreamed on the Kimzey Funeral Facebook page at 11am Tuesday. Pastor Jeff McPherson will officiate. Burial will be at a later date. Online condolences may be directed to the funeral home website, http://www.kimzeyfuneralhome.com. In lieu of flowers, memorials may be directed to the family for charities toF be determined later. 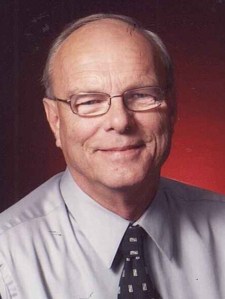 Frank was born on December 5, 1942 in Albert Lea, Minnesota, the son of Frida (Bakken) and P. Eugene Ostby. He was baptized and confirmed at First Lutheran Church of Albert Lea, Minnesota. Frank graduated from Albert Lea High School, got his Bachelor of Arts Degree in Math Education from Augustana College in Sioux Falls, South Dakota in 1966 and his Master’s Degree in Math Education from Drake University in 1974. He left this earth on December 17, 2020 in Winfield, IA after a short battle with lung cancer with his children by his side.

Frank married the love of his life, JoAnn Baasen on June 8th, 1968 at Rock Prairie Lutheran Church in rural Elbow Lake, Minnesota. They were married 52 years. They set a great example of how to love your spouse in good times and bad. Frank and JoAnn had three children, Cheryl, Kris and Paul.

Frank was a Junior High Math Instructor for 14 years in West Union, IA, where he met several life-long friends. After teaching, Frank joined Heying Foods (West Union, Iowa) as the Production Manager and was transferred to Panora, Iowa. He finished his career with Gold Oval Eggs as Production Manager first in Renville, Minnesota and finally Thompson, Iowa. Once retired, Frank and JoAnn spent time in Mesa, AZ in the winter. Wherever Frank lived, he made good friends.

Frank was highly active in the various churches where he was member. He served as treasurer and was involved in choir and junior league. Frank loved to sing, play golf, bowl, play pool and card games. He also loved camping and family trips. Frank and JoAnn enjoyed traveling in the US and on cruises. They traveled to Norway twice, as Frank held great pride in his Norwegian heritage. In Mesa, he loved to play pool volleyball; followed by “Happy Hour”. He was very proud of his three kids, and his grandchildren brought him great joy.

Frank is known for his kindness, compassion, friendship and his boisterous laugh, AKA “the Ostby” laugh. The three most important things that mattered to Frank were his family, church and being a decent, respected person. He will be greatly missed.