Harley Harold Miller of St. Paul, a former resident of Albert Lea and Wells, Minnesota, died on December 20 at age 96 of illness due to COVID-19. 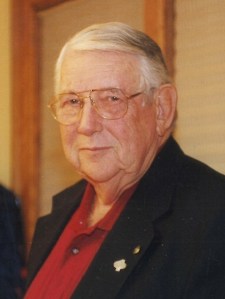 Harley was born December 30, 1923, to Edward F. Miller and Minnie Henke Miller and was the fourth generation to live on the family farm, north of Wells. He married Irene Schrader of Easton and together they celebrated 73 years of marriage.

Harley and Irene enjoyed gardening, cooking, playing cards, hosting family and friends, and traveling. Harley was an avid golfer who had the distinction of achieving a hole-in-one on Father’s Day while playing with his son and grandson. Harley was also a competitive bridge player, often seeking out tournaments. His appreciation of nature and the outdoors led him to fish, hunt, bike, and cross-country ski.

Throughout his life, Harley was a constant reader which fed his interest and curiosity. Under Harley’s gruff exterior was an affection for his children and grandchildren, greater family, and friends. Family gatherings brought him much happiness, and he enjoyed sharing his love of fishing with his grandkids.

Harley left farming and was a salesman before his career as an investment broker. He was a proud resident of Albert Lea and parishioner of First Presbyterian Church and lived on the south shore of Albert Lea Lake for over 40 years. After retirement he found rewards in serving the community. He campaigned for the referendum to build a new Albert Lea High School and spearheaded a fundraising campaign for the Albert Lea Senior Citizen’s Center. He also led state and local efforts to improve the quality of the lakes in the Albert Lea area by establishing the Shell Rock River Watershed District, which included securing a sales tax to support its projects. Harley was recognized as Freeborn County’s Outstanding Senior Citizen in 1999.