Janel Kay Beckman passed peacefully away on December 19, 2020 at Rakhma Peace Home in  Minneapolis. She was 76 and born on October 27th, 1944 to Rubye and Lewis Lansing in Rolfe,  Iowa. Her family soon moved to Bricelyn, Minnesota where her parents ran Lew’s Meats on  Main Street. 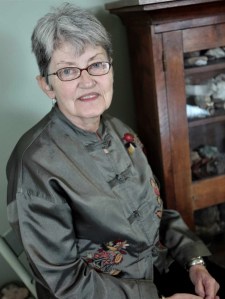 Janel graduated from Bricelyn High School in 1962 and then attended The Original  LaJames College of Cosmetology in Mason City, IA. She married Tracy Beckman in 1963 and  they embarked on their life journey together. Janel was a lifelong rock-hound and fossil collector  and together with Tracy they explored rock and fossil deposits wherever they went. After Tracy’s  military stint in Texas, they settled back in Minnesota and lived in Mankato, Madison and  Redwood Falls before they purchased Bricelyn Hardware in late 1974. Together, they ran the  business, raised a family which included their adopted daughter Rosa, from Bogota, Columbia  and made a home for foster children. Janel also worked as a Guardian ad Litem in Faribault  County and was a fierce advocate for victims of abuse. When Tracy entered politics, Janel ran  the store full-time, managed the household and continued to cook homemade meals for their  five children while still consuming piles of mind and heart expanding fiction and poetry. In  retirement, she and Tracy explored the US and visited family from their RV. She continued to  collect rocks and artifacts weighing down the RV on trips back to Minnesota.  Janel was deeply creative and expressed this energy in many forms including hair styling,  découpage, macramé, antique furniture refinishing, crafting decorative holiday decor,  wallpapering, interior painting work, drawing and painting. While living in Washington, D.C. in  the early 2000s, Janel dedicated much of her time to studying painting and developed her own  style, first water color and then acrylic. Janel’s oeuvre comprises over 200 paintings now  treasured by family members and friends. Her daughter, Robin, curated a final art show in Albert  Lea that displayed much of Janel’s work in January 2017.  Janel was a feminist, free thinker, jazz lover, vegetarian and peace seeker. She was a kind soul  who always had others in mind. She was a fighter who lived for many years with autoimmune  liver disease and then dementia. Yet, she continued to turn outward, helping others until  dementia confined her activity. Throughout her life, she touched many and influenced her family  and friends to be kind to one another. We also all knew Janel as a straight-shooter who could  articulate her disagreements with colorful language, a legacy from her parents.  She is survived by her husband Tracy and their five children: Robin Gudal (Greg), Matt  Beckman (Rebekah Teague), Anna Almerico, Rosa Munoz Beckman and Dan Beckman Moon  (Amy Moon Offerman Sims). Her grandchildren include Scott (Andrea), Charlene (Brian), Isaac  (Ann), Hannah (Matt); Theo, Opal and Iris; Olai and Agnes. She had eight great-grandchildren  and two great-great grandchildren. Her siblings include Loris (Lee) and Armon (Becky) and their  families. In-law siblings include the Steve (Linda) Beckman family, the Sandy Lorenz family and  the Troy (Anita) Beckman family. She is preceded in death by her parents, in-laws Lucille and  Harold Beckman, brother-in-law Bruce Lorenz and many other cherished relatives. Janel had  many dear friends who supported her until the end.  When she began experiencing memory problems she enrolled as a participant in studies of  dementia at the Mayo Clinic. Her last act of generosity was bequeathing her brain to medical  research so that scientists can better understand Alzheimer’s Disease and dementia. In lieu of  memorials, please donate to Rakhma Peace Home ( https://www.rakhma.org/ ) or another  charitable organization. In her memory, be kind and generous to others. A celebration of Janel’s  life will be held at a later date.