Maurine (Kelly) Larson McGill, age 98, passed on to be with the LORD  December 10, 2020 at the Cedars Villa in Minneapolis, MN 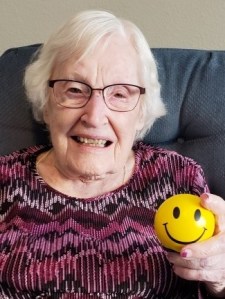 Maurine was born March 3, 1922 to Benjamin and Delphine (Kegler) Kelly. She graduated in 1940 from Albert Lea High School. On December 6, 1945 she married Charles Albert Larson. They were married for 54 years and raised four children.

Maurine was a homemaker while her children were at home. She helped Chuck with his fuel oil delivery business. For 30 years she worked as the head housekeeper at Thorne Crest in Albert Lea.

She loved traveling especially visiting the children and grandchildren in  three different states.

A Celebration of Life is being planned for a later date.

In lieu of flowers the family requests memorials to be sent to The Alzheimer’s Foundation or Hospice.