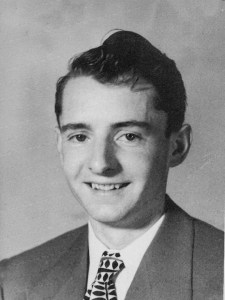 Merlin was born April 2, 1928, at the Union Labor Hospital in Eureka, California, to parents Clifford Huddleson and Doris (Alexander) Huddleson.

He attended Lincoln Elementary School. He didn’t like going to school, so his mother would chase him with a stick every morning to make sure he got to class (a story which delighted us kids).

Merlin started working at age fourteen at Home Guernsey Dairy seven days per week while also attending school. He graduated from Eureka High in 1945, then worked for the Forest Service during fire season that year. In February, 1946 he enlisted in the U.S. Army. After completing basic training Fort Bliss, El Paso, Texas, he was sent to Japan as part of the U.S. occupational force. He was enrolled in signal school when he opted to become a paratrooper. He was then assigned to the 11th airborne, and always claimed that the first time he ever flew in a plane he had to jump out of it.

Merlin worked for Western Electric after leaving the service, but was laid off after two years. He then went to work for the U.S. Postal Service in 1949.

In the summer of 1959, Merlin began attending the First Covenant Church in Eureka, where he met his future wife, Patricia Ellis. The couple married on March 12, 1960, and had two children, Mark and Jane.

After retiring from the Post Office in 1983, Merlin assisted his wife with her flower business (Pat’s Flowers), until she retired in 1990. The couple then moved to Albert Lea, Minnesota, where they lived out their remaining years.

We remember Dad as being kind, a good provider, generous with those in need, and a devoted family man.

He was a devout Christian, never wavering from his faith. He loved helping others and regularly put into practice that which he believed.

He was preceded in death by his parents, Clifford and Doris Huddleson; his sister, Delorah Brown; and his brother, Neil Huddleson.

We would like to thank Thorne Crest Senior Living Center, Veterans Administration, and St. Croix Hospice for looking after our father in his final days.

Due to the pandemic, Merlin will be laid to rest in a private ceremony.

Memorial contributions may be made to: The Ministries Of Project Happiness: 807 S Newton Avenue, Albert Lea, MN 56007