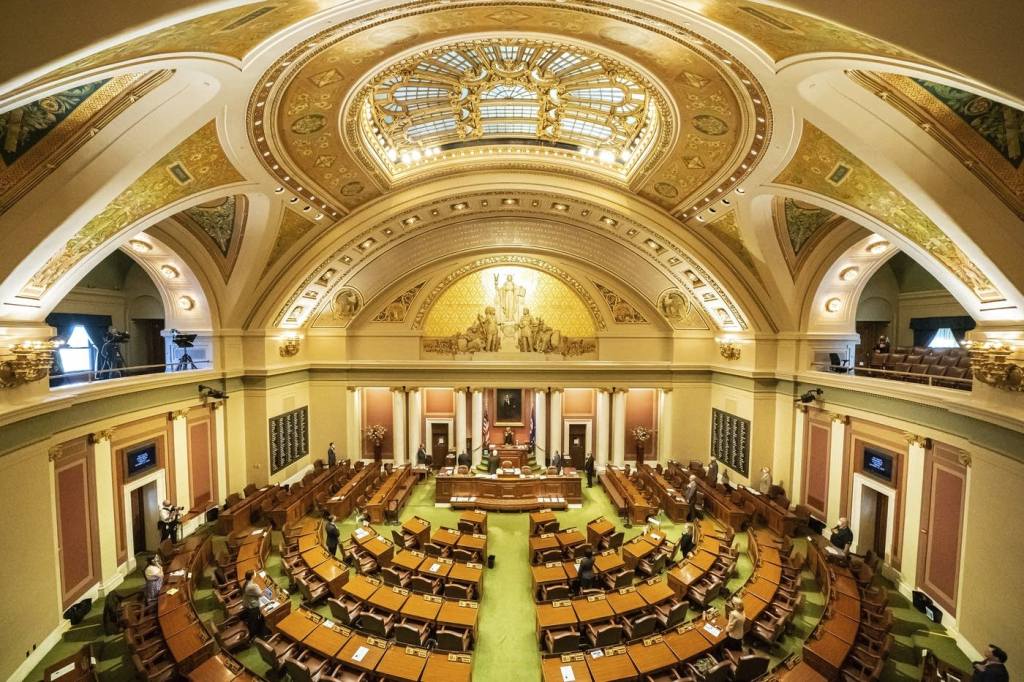 The state Capitol will be a busy place Monday.

Minnesota members of the Electoral College are set to meet at noon to cast the state’s 10 votes for Joe Biden. And lawmakers are returning for the year’s seventh special session to consider relief for businesses and others in financial peril due to the COVID-19 restrictions.

The relief plan includes about $216 million in state help for businesses and nonprofits and a 13 week extension of unemployment benefits. The business relief will be in the form of grants and other payments based on the size of an employer and the depth of the sales downturn.

The state has a pretty good idea of which are facing the most hardship by looking at sales tax data.

Some of it — about $102 million — will be routed through counties. Other money will go directly to the businesses. Restaurants, breweries, wineries, bowling alleys and health clubs would qualify for at least combined $100 million in help out of that second fund.

Movie theaters and convention centers — two types of places that were essentially mothballed — would draw from a separate $14 million pot of aid.

One of the architects is Sen. Eric Pratt, R-Prior Lake. He said no business is going to get rich, but maybe they’ll get by.

“The goal of this is while their doors are locked, we don’t want them putting plywood in the windows,” Pratt said. “We want them being able to survive these next few weeks. And hopefully the governor ends the shutdown and we can get these businesses up and running and people back to work.”

There aren’t significant changes to state alcohol laws to increase off-sales of cocktails and beer for places that aren’t open right now.

But lawmakers did reach an agreement on unemployment checks, after talking over the weekend. As many as 125,000 people here are set to see their last check just after Christmas. That’s because they’ve been out of work in some cases since March.

House Majority Leader Ryan Winkler said Monday morning that there will be 13 more weeks available to people bumping up against the cap, ensuring they will have aid until April.

That’s along the lines of what Democrats proposed. Republicans signed off after securing an agreement that the benefits would run concurrent with any federal extension, so people can’t stack the payments on top of each other for an even longer window of help.

“This ensures that Minnesota workers will not go without unemployment if they’ve been out of work for a long period of time this year due to the pandemic,” Winkler said, adding that talks continue on other aspects of a relief package, including a one-time $500 payment to needy families.

Democratic lawmakers wanted to extend the deadline by 13 weeks. Republicans were countering with five. The cost is about $40 million per week if current usage continues.

Gov. Tim Walz wouldn’t say last week if he would hold up the business relief if the unemployment part was missing. But he made clear it would be wrong to do one and not the other.

“I would just say I don’t know how would you go home not providing aid to those folks,” Walz said Friday. “It is not the Minnesota Legislature’s fault regardless of political ideology. It is the federal government’s fault because they have not extended that.”

If Congress comes through with a long-awaited stimulus deal, the idea is that money would backfill for what the state spends.

It’s likely such a package would help cover an unemployment extension for people nearing the maximum length of benefits.

That’s important because the state is borrowing money now to pay the jobless benefits it’s offering due to the severity and duration of the economic crisis.

Few around the Capitol were holding their breath for a swift federal deal given that one has been elusive for months.

Walz’s restrictions on restaurants, theaters, gyms and other venues are due to lapse Friday. It’s not clear if some or all will be extended beyond that.

Late last week, Walz talked about how Minnesota’s coronavirus numbers are moving in the right direction — new cases and infection rates are both down — but he’s not convinced the most serious COVID-19 threat has passed.

Walz has a range of options: He can tack on more time to his order that barred dine-in service, closed fitness centers, bowling alleys, museums, theaters and more and put youth sports on hold.

He can lift the restrictions entirely by not re-upping them beyond Friday.

Or he can tweak them, perhaps allowing some in-person dining service or limited capacity in those other places. His comments last week sounded like that last option was in the works.

Monday’s special session starts a bit later than the other six in 2020 because of the once-every-four-years gathering of the Electoral College.

Ten Democratic electors and alternates will come together at noon in the Minnesota House chamber. These are long-time party activists and others who ran for the spots at party conventions.

Because of COVID, attendance will be limited but you can catch it online. But the outcome is as definite as it comes — all 10 votes will go for Biden, who won Minnesota’s popular vote. Minnesota law doesn’t allow for faithless electors.

The Capitol itself is closed to the public so disruptions to the ceremony aren’t anticipated, but plenty of security will be on hand given the politically sensitive times.