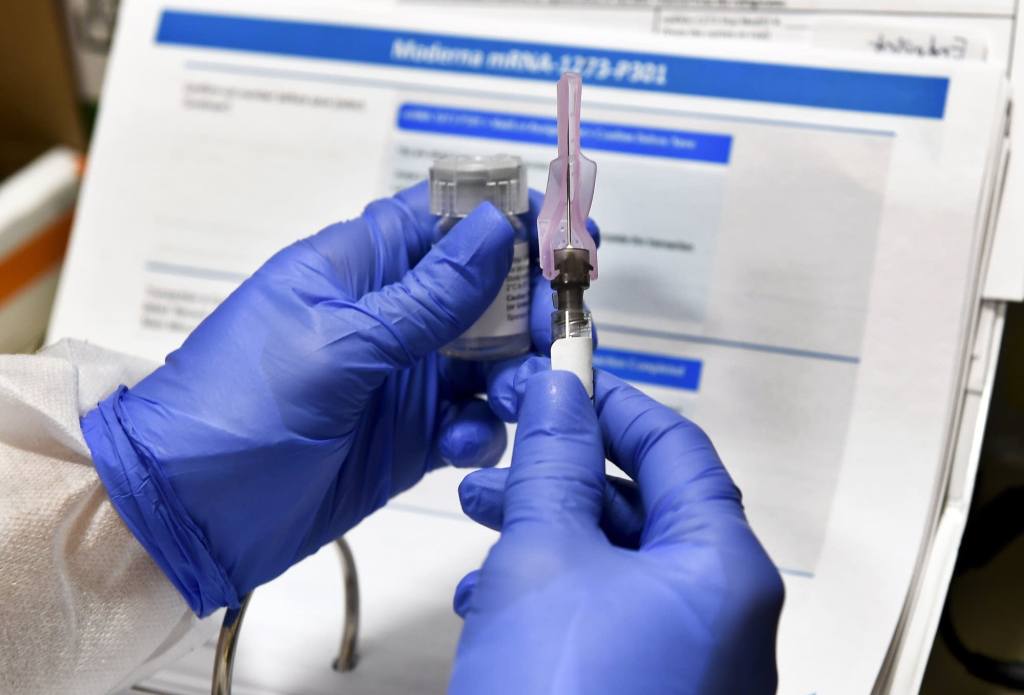 Nurse Kathe Olmstead prepares a shot that is part of a possible COVID-19 vaccine, developed by the National Institutes of Health and Moderna Inc., in Binghamton, N.Y., on July 27. Minnesota officials are set to announce plans to vaccinate people possibly starting this month. Hans Pennink/AP/via MPR News

With cases of COVID-19 still surging throughout Minnesota, Gov. Tim Walz is expected to announce the state’s plan for vaccine distribution Tuesday.

Walz said Minnesotans can expect to hear from public health experts and a bipartisan group of legislators on the state’s strategy.

“It’s been too long since we’ve talked in a bipartisan manner and stood together on COVID like we did in the early days of [the pandemic],” Walz said in a Monday press conference. “It’s my hope that we are bringing that sense of ‘One Minnesota’ tackling this together back to you in terms of where we go with the vaccine.”

Two vaccines — one made by Pfizer and one made by Moderna — are being considered for emergency use by the Food and Drug Administration. The agency’s decision about whether to allow the Pfizer vaccine to head to market may come as early as this week.

That timeline could position Minnesota to start vaccinating people as early as the week of Dec. 14.

Earlier this month, the Centers for Disease Control and Prevention recommended that health care personnel and residents of long-term care facilities be the first to get the vaccines.

With a working group of physicians, hospital representatives, pharmacies, and long-term care administrators, Minnesota public health officials have been working out a distribution plan tailored to the state’s needs and challenges.

“Folks need to understand that it’s going to take some time for the vaccine to roll out to the public,” said state Health Commissioner Jan Malcolm in an interview with CNN. “In the first wave, that will be immunization of health care workers who are working in hospitals and long-term care and also the residents who live in skilled nursing facilities and assisted living facilities. That’s going to be happening automatically within those sites.”

But even as distribution to some groups is taking shape, challenges remain in getting it to the wider public in coming months.

The Pfizer vaccine needs to be kept extremely cold, which may be a logistical issue for rural areas of the state where space to adequately protect the vaccine is scarce. Both the Pfizer and Moderna vaccines also require two doses within weeks of each other, so public health officials are considering strategies to make sure people who get their first shot come back for their second on time.

At first, states will be allocated limited quantities of the vaccine to start immunizations. University of Minnesota public health professor and director of the Center for Infectious Disease Research and Policy Michael Osterholm said that may be years before everyone in the world is vaccinated.

“If you look at the world’s availability of vaccines … it’s going to take until at least 2024 until there’s enough vaccine doses for the 8 billion people on the face of the Earth,” Osterholm said, adding that Americans will likely be vaccinated this year. “As long as there is transmission in middle-and-low income countries we are going to still see it keep spilling into the U.S. for those who aren’t vaccinated or protected through illness.”