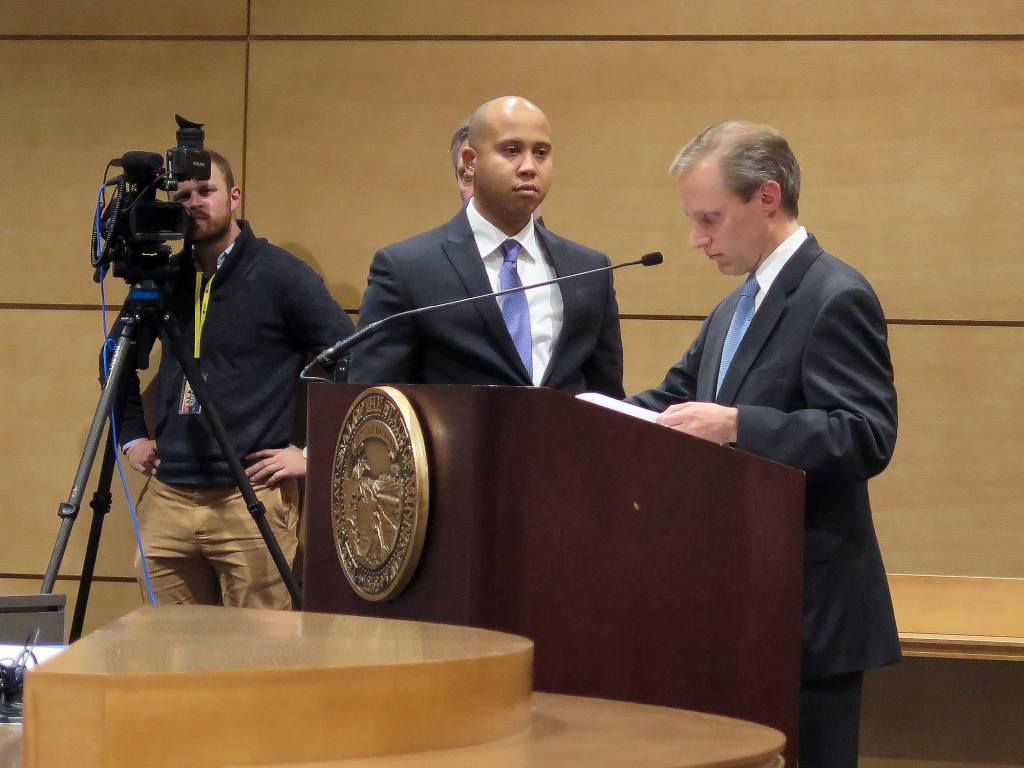 Muhammad Abdurrahman stands next to Secretary of State Steve Simon before he is excused as a Minnesota elector on Dec. 19, 2016, having voted for someone other than Hillary Clinton for president. Brian Bakst/MPR News File

Minnesota’s past brushes with Electoral College drama are a big reason why this year will probably lack it.

That law came into play four years ago when an elector bypassed Minnesota victor Hillary Clinton for her primary rival, Bernie Sanders. That elector was immediately removed and an alternate cast a vote for Clinton in his place.

Coincidentally, the wayward elector is back this year. Muhammad Abdurrahman said in 2016 that he disagreed with Minnesota’s law binding electors when he went off script, but he told an MPR News producer last week that he would back the party ticket this time.

Abdurrahman and the other nine electors — and their 10 alternates — all signed pledges this year before the party submitted its slate of electors to the Secretary of State back in August. The DFL Party pledge said they would support the Nov. 3 winner in Minnesota as a condition of their appointment.

It reads in part: “I agree that I voluntarily resign and automatically vacate my position as an elector to the Electoral College if I determine at any time that I cannot fully support the Democratic presidential and vice presidential nominees, cannot participate in the Electoral College proceedings or any prior processes prescribed by law, become incapacitated, fail to present an electoral college ballot or present a ballot in violation of this pledge.”

After getting bumped last time for his vote, Abdurrahman sued over Minnesota’s elector law. His case bounced through the federal court system and was ultimately dismissed on technical grounds. But similar cases from other states did wind up yielding a conclusive decision.

Last summer, the U.S. Supreme Court upheld state laws that require electors to follow the will of that state’s general election voters.

One of Abdurrahman’s lawyers in his case, Travis Thompson, said it’s now settled law. Thompson is himself an elector this year and will cast his vote for Biden-Harris despite his personal support for Sanders during the Democratic primaries.

“There would be no reason to raise any of these issues now,” Thompson said. “There is no longer a controversy around the issue of faithless elector statutes as a practice and it would just be a pyrrhic victory to get tossed off of the Electoral College for no good reason.”

DFL Party Chair Ken Martin said most of the Minnesota electors are chosen at the congressional district level in the spring by local activists, with a couple picked by state convention delegates. He said the new pledge was intended to make sure people understood their role and to reinforce the law.

“There will be on Dec. 14, 10 votes for Joe Biden and Kamala Harris regardless of whether or not someone votes for someone else,” Martin said. “There’s no way actually there can be a ‘faithless elector’ at this point. And there’s plenty of mechanisms to deal with that.”

If they do go rogue, Martin said it won’t matter to the vote tally.

“It’s just sort of a nothingburger. So they decide to vote for someone else, they get yanked right away by the secretary of state and the alternate comes in,” he said. “It doesn’t really matter. It might be a news story for you guys but for us the only thing that matters are the votes at the end of the day.”

The ballots are announced on the scene and then sent to Washington for the official count in Congress on Jan. 6.

Because of the COVID-19 pandemic, the Minnesota proceedings won’t have in-person spectators this time.

Secretary of State Steve Simon will convene the ceremony in the Minnesota House chambers at noon sharp on Dec. 14. It will be live-streamed on his office’s YouTube channel. Media access will be “extremely limited” and “only electors and other staff needed to administer the assembly” will be in the room, Simon spokesperson Risikat Adesaogun said.

There’s one other wrinkle this year: The Legislature is due to be in session on the same day, also because of actions tied to the pandemic. Adesaogun said Simon’s office has been coordinating with House leaders to avoid competing for the same space at the same time.