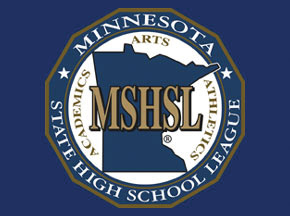 The seal of the Minnesota State High School League

MSHSL approves plan for the return of winter sports season

The Minnesota State High School League approved a flexible plan for the restart of winter sports at its board of directors meeting Thursday afternoon.

The plans would go into effect after clearance is given by state government leaders. The current mandate, which put high school sports on a four-week pause, is set to expire on Dec. 18.

The MSHSL’s Return to Participation Task Force included three models that could be modified to coincide with the timing of a green light from the governor’s office.

“With the dynamic nature of COVID-19, flexibility is going to be critical for our programs,” said Erich Martens, executive director of the Minnesota State High School League. “We need to remain flexible in the start of seasons and in carrying them to conclusion.”

If the sports are allowed to resume practices on Dec. 21, that would allow for the first games to be played on Jan. 4.

Included in the leagues models are weeks that will be designated for section tournaments and potential state tournaments.

“We know that the state and our schools are facing extremely high case counts and that adjustments in the models may need to take place, and if so, we are ready to make those adjustments in our calendar,” Martens said. “Should the winter season restart get pushed later, we may see shorter seasons and fewer games.”

The current plans have accounted for potential adjustments to the winter season. Some of those adjustments may results in small disruptions in the spring sports season.

“All models presented by the Return to Participation Task Force were constructed with a focus on providing an experience in every one of the League’s activities and sports,” the league said in a statement. “In addition, health and safety recommendations from state organizations and agencies, and the unique aspects of each sport were a part of the planning.”

The models also included a look into the spring seasons. Plans for the spring include the traditional number of contests and include an end date of no later than June 19.