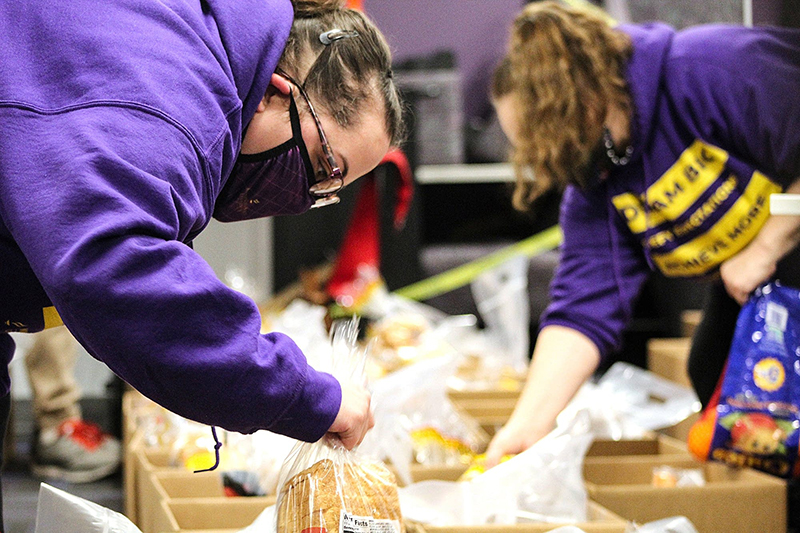 Inside the Intercultural Student Center on the campus of Minnesota State University, Mankato earlier this week, more than a hundred boxes packed with food were stacked against the walls and lined up in the middle of an office. Back in the freezer, eight hams — weighing in at 18 pounds each — sat ready to become a part of some students’ holiday meals.

This was the second week of free food distribution at the MSU Mankato campus for students in need of an extra hand with groceries during an already challenging year. It’s part of a larger university effort to connect students — nationwide, a population adding to the ranks of those experiencing food insecurity — with regular, affordable access to food on campus.

Masaki Hara, a 25-year-old junior studying zoology, was one of the students who picked up a box of groceries Monday. Hara is originally from Japan, and lives off campus. He doesn’t own a car, which means a simple trip to the grocery store can be a logistical challenge: He would have to carve out several hours to pick up just as much of the essentials as he could carry on the city bus.

If he doesn’t time it just right — if there’s a long line at the checkout or he doesn’t catch the right shuttle back — those regular errands for weekly essentials can cut into class time, too.

“Walmart [and] Target are far from campus,” Hara said. “So this service is nice, because I can get free food, and I can save time.”

Between the planning and the cost, Hara said it hasn’t been uncommon for him to occasionally miss meals. But Monday was his second visit to the Intercultural Center to pick up a week’s worth of food — and he says it’s made a huge difference.

Kelly Meier, the director of the Maverick Food Pantry, said about 50 students took advantage of  the project’s very first grocery distribution last week — and about three-quarters of those students returned for this week’s event. She anticipates that once students return to campus next month, the number of people using the school’s burgeoning food assistance service will grow rapidly.

“If you were to walk by the multicultural center right now, you would see 400 boxes, and students filling them. They’ve been filling them all week,” Meier said.

Each student who shows up on distribution day gets enough food to feed a one-person household for the next week. All they have to do is present their student ID. The food boxes have dairy, vegetables, meat and canned goods. For now, the program is funded by donations, which the university uses to buy food directly from stores.

But Meier hopes that’s a temporary arrangement. The long-term plan is to eventually find a more sustainable funding source, and partner with companies for products.

The need, she said, is clear.

“What’s even more that pulls at your heartstrings is that some of our students shared that they’re sleeping through hunger pains,” Meier said. “Choosing not to go to class or not to engage on campus because they were too hungry.”

Two years ago, researchers at the university found that about 40 percent of students were experiencing what they would characterize as high or very high food insecurity. All told, almost two-thirds of the student body was in need of some type of food assistance, some of the time.

And while most MSU Mankato students are in distance learning mode at this point in the semester because of COVID-19, some have remained on campus because of pandemic-related restrictions. Many of the students picking up food for the holiday break are international students who aren’t able to go home, first-generation college students, athletes, students with young families and student workers.

Some of those students, like Masaki Hara, lack reliable transportation to get to grocery stores off campus. And that’s why, Meier said, having a central location for students to pick up food is important.

“If you take a bus from campus and go to Walmart, for example, the round trip version of that is four hours in order to catch the bus, go there and shop and then catch the right bus to get back,” she said.

“Plus, walk from the bus stop to wherever you live. So a lot of people don’t have that ability to fit that in, and that’s another reason why we felt it was a powerful signal to our students that we’re supporting them by having it right on campus. So they can be on campus and in between classes, go and grab that food if they need to. We want to make it as easy for them as possible.”

Food access is a problem on college campuses nationwide. The National Institutes of Health estimated that even before the COVID-19 pandemic, 1 in 3 college students faced food insecurity.

School officials in Mankato worried that the problem will worsen as yet another ripple effect of the pandemic. Henry Morris, the university’s vice president of diversity and inclusion, said that many of the school’s students arrive on campus with significant financial need.

Financial hardship and hunger go hand in hand, Morris said, and both have been exacerbated by the pandemic, as many students lost their jobs or other financial support.

“A lot of them are first generation in college, a lot of them may have had family support, but that support went away,” he said. “People lost jobs and have not got it back. A lot of students worked, but again, those jobs went away, and so it is just a series of issues of students making choices of where they can spend their money and we want them to worry less about some things and have options for other things.”

Helping students like Masaki Hara alleviate some of the pressures of this challenging year comes in the form of offering some free groceries. Hara said he appreciated every bit of help he could get.

Organizers hope the boxes of food can be the bridge students need to make it to spring semester, when the full-fledged Maverick Food Pantry is scheduled to open as a permanent part of the campus community.