New highway in southern Minnesota will include passageway designed for deer 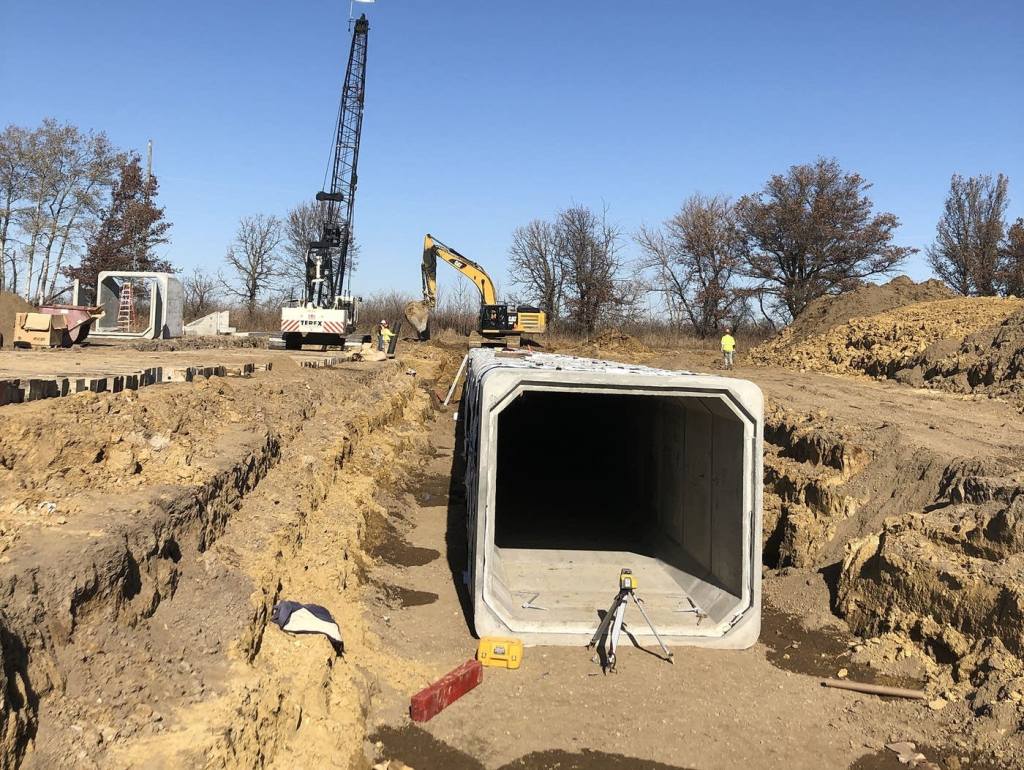 Crews work to install a large box culvert that will serve as an underpass for deer along the new four-lane Highway 14 near Claremont, east of Owatonna. Minnesota Department of Transportation

All across Minnesota, highways of concrete and asphalt cross thoroughfares of a different kind: corridors used by wildlife as they seek food and shelter.

A new highway under construction in southern Minnesota is taking that into account, in a way that’s a first for state road construction projects.

The Minnesota Department of Transportation has installed an underpass for deer along the new four-lane Highway 14 near Claremont, east of Owatonna. It’s the first time MnDOT has included a structure designed primarily for deer to safely cross under a roadway, and to prevent car-deer collisions.

“We’ve long recognized this need to try to improve driver safety through things like this,” said MnDOT wildlife ecologist Christopher Smith. “But certainly, it also has this environmental or natural resource benefit, connecting habitats, allowing animals to move safely underneath the roadway. And so it’s really a win-win, both from a driver safety aspect, as well as a conservation aspect.”

As the new highway was being designed, information from the Minnesota Department of Natural Resources was used to pinpoint a particularly vital and well-traveled deer corridor southeast of Claremont. It links summer habitat in and near Rice Lake State Park with winter habitat to the south — with the new highway route crossing in between.

Then MnDOT looked at where the new highway needed culverts for seasonal drainage, during spring runoff and after storms.

“The original designs, without considering any sort of wildlife, would have called for some culverts in this area anyways; they would have likely been smaller pipes,” Smith said. “But instead of using two or three smaller pipes that a deer would never be able to fit through, we worked with the project engineers and the contractor to come up with this plan that uses this larger box culvert.”

It’s a 10-foot-by-9-foot, typical box culvert — big enough to allow deer to walk through, but within the constraints of the road project and surrounding landscape. It helps with drainage but will be dry most of the year. And it’s short enough that daylight from the opposite side is clearly visible — which may help skittish deer adapt to it.

Once the highway project is done in late 2021 or early 2022, Smith said MnDOT will monitor the passageway to see how deer and other animals are using it. That could include looking for tracks, or possibly motion-activated cameras.

“There are other things we can do in the future, if needed, to improve the use,” he said. “That’s things like changing some of the vegetation around it to kind of direct deer and other critters to the passageway, or on the extreme, actually installing fence or some other barrier that physically directs them to this underpass.”

While the underpass is the first highway structure in Minnesota designed specifically for deer, MnDOT has included wildlife-friendly design elements in other bridges and culverts. In recent years nearly all new state highway bridges over water have included what’s called a “passage bench.” It’s a small pathway that allows wildlife to traverse the riprap — rocks and boulders along the water’s edge — under the bridge.

And other states — particularly in the western U.S. — have installed underpasses and overpasses to allow wildlife to safely cross highways.

It remains to be seen whether other upcoming highway projects in Minnesota will include similar passageways for deer, but Smith said there’s growing public awareness of the need to maintain habitat connections across highways.

“Deer-vehicle collisions are a big issue in Minnesota,” Smith said. “Anything we can do to minimize those impacts is something we want to consider.”