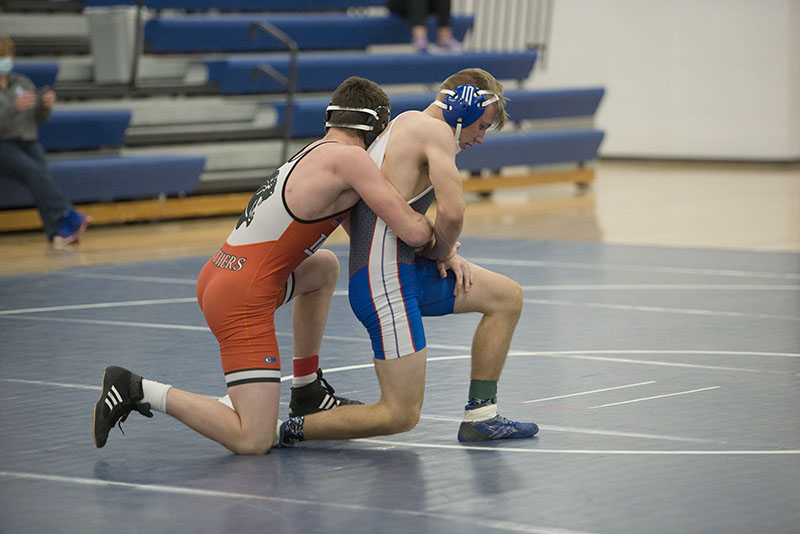 NORTHWOOD — The Northwood-Kensett wrestling team hosted Tripoli and Cresco Tuesday night in their first action of the 2020-21 season.

The Vikings ran through the Panthers in the first dual of the night before taking on the Cadets to cap of the meet.

After double forfeits at 132 pounds and 138 pounds,  junior Hayden Moore got the Vikings their first win of the night with a pinfall in the second period.

Junior Josiah Kliment picked up a forfeit win at 152, followed by senior Brandon Varner who also won by forfeit at 160 pounds.

Already up 18-0, the Vikings sent out junior Drake Teidemann at 170 pounds. Tiedemann picked up a decisive victory, winning via a technical fall in the second period, 17-1.

Sophomore Dante Sims was next up, taking on his opponent at 182 pounds. Sims took control early, but fell behind and ultimately came up short in a 14-6 major decision.

Tripoli picked up forfeit wins at 195 pounds and 220 pounds before junior Mason Thofson took a forfeit win at 285 pounds to put the Vikings on top 29-16.

Double forfeits at 106 and 113 kept the score where it was before sophomore Treycen Rollene got the last win of the dual with a forfeit victory at 120 pounds, giving the Vikings a 35-16 win.

The Vikings didn’t fare so well in their second dual of the night. The Cadets, ranked No. 5 in Class 2A, took it to the Vikings only allowing two wins.

The Vikings are 1-1 to start the season. They will be back in action Thursday when they travel to Osage to take on Osage, North Butler and North Union in a quadrangular.