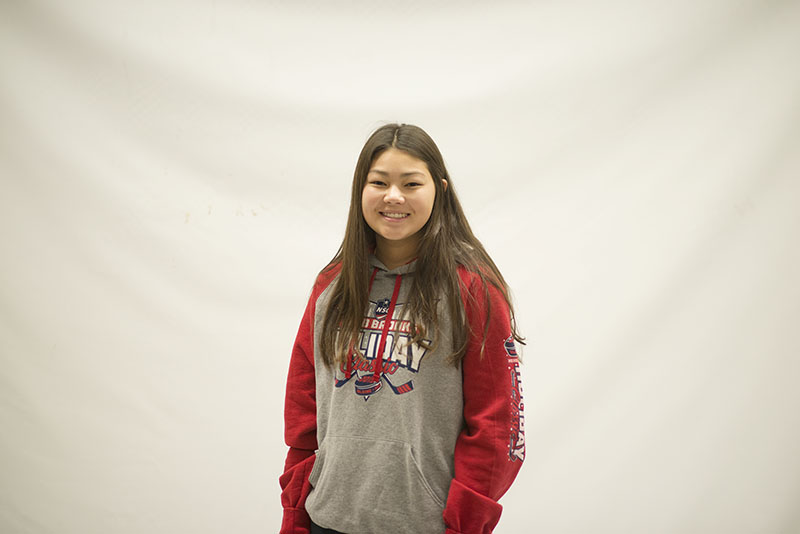 Albert Lea senior Alli Dulitz has been involved in sports ever since  she was a young child. Whether its was just being active outside with her friends or playing in organized sports, Dulitz has kept busy playing multiple sports.

Throughout her high school career Dulitz has played soccer, tennis and hockey.

Of the three sports she has been a part of, Dulitz said hockey is her favorite to participate in.

“I’ve just always loved it,” Dulitz said. “The girls in my grade, we’ve created a bond. We’ve been playing together since we were in mites, which was when we were like 8 and 9.”

She said she got into hockey because her older brothers played and her family was always down at the rink when she was younger and that’s where she learned to skate. All the time spent at the rink and the time spent on the ice with her family, Dulitz said it did not take long for her to start loving the game. 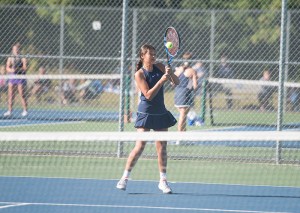 Dulitz switched from soccer to tennis after her freshman year to try something new. She had been involved in soccer for many years before making the switch. – Tyler Julson/Albert Lea Tribune

Dulitz said her favorite memory of her entire sporting career came from hockey. During her seventh-grade year, the girls were given the choice to play for the high school team or the U15 team. While half of the grade chose to play for the high school team, Dulitz and a handful of her classmates chose to play on the U15 team. She said it was one of the best decisions she has made.

“There were five or six of us that were really good friends on that team,” Dulitz said. “We just had fun with it. It wasn’t as high of a level as high school, but we were on of the better teams just because we were all pretty good. That was fun. I really liked that year.”

Now a senior on the hockey team, Dulitz has been a mainstay on the varsity lineup as a forward.

Albert Lea’s head girls hockey coach, Mark Goskeson, said he’s excited for the upcoming season with Dulitz as one of the captains.

“Alli is a great leader and role model,” Gosekson said. “She is the captain of her team and a play maker on the ice. She is always smiling and sets a good example.”

“She has an incredible work ethic and dedication to hockey,” Funk said. “For the two years I coached her, she was always looking for ways she could improve her game. She bought into the new culture, and became a strong leader in the locker room. From joining nearby gyms, to participating in high level leagues in the cities, Alli has always strived to do what she needed to to improve.”

Despite switching from soccer to tennis early in high school, Dulitz had played youth soccer for many years before making the switch. She said she got into soccer, much in the same way she got into hockey — watching her brothers.

After playing soccer at the high school level for a few years, Dulitz said she didn’t feel as passionate about the sport as she used to, so she decided it was time to switch it up.

“My family always likes to play tennis just for fun,” Dulitz said. “My brother was in it, too, so I thought I would just try something new. I had friends on the team, too, so that helped.”

Dulitz quickly moved up the ranks on the tennis team and spent a majority of this season as the team’s No. 1 singles player. 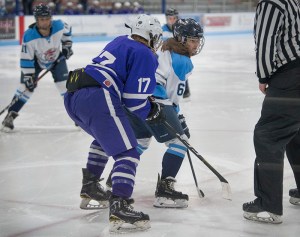 Dulitz said she has been playing hockey every since she was a young child. She said she got into the sport because her family has spent time at the rink for as long as she can remember and her older brothers played. – Tyler Julson/Albert Lea Tribune

“Alli is hard-working on and off the court,” said head girls tennis coach Jannessa Runia Bade. “For tennis this year, she led by example. She often made sure all the girls did what they were supposed to and helped support them. Alli is so kind to others and dedicated to doing her best, not only for herself, but also for her teammates and community.”

Dulitz has also been the manager for the baseball team, and outside of sports she is the student council president, a member of the National Honor Society and the Link Crew.

Dulitz said he isn’t quite sure how life is going to look after graduation. She knows she wants to go to college and has applied and been accepted to a few schools. She doesn’t think she will continue her athletic career in college, but she isn’t completely opposed to the idea.

She offered up some advice for underclassmen athletes.

“Do what you love,” Dulitz said. “High school is a place to learn new things and try new things. Like when I decided to join tennis instead of soccer, I was definitely scared, but it was a good decision.

“If you choose to do something, go all in. Don’t hold back and be the best you can be because you’ll have the most fun with that.”