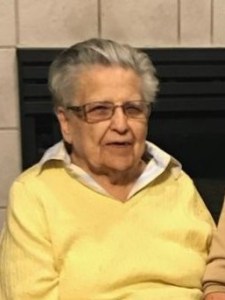 Shirley was born Nov. 6, 1930 in in St. Paul, MN, the daughter of Rudolph and Myrtle (Wrage) Schuster. As a teenager, she loved working at the Albert Lea Root beer stand. She was united in marriage to Frank Olean Oberg on April 27, 1952 in Albert Lea, MN at First Lutheran Church. To this union 4 children were born. Shirley played a lot of Scrabble with her good friend Bonnie into the wee hours of the am. She was an active member of United Lutheran Church in Walters and had worked at a foster home for many years. Shirley loved collecting coffee cups. She was an avid card player and played many card games with her friend Marilyn Haukoos, and neighbors. Shirley enjoyed time spent with her family and friends having potluck dinners and suppers. She was a member of the Walters Senior Citizens.

She is preceded in death by her parents and husband Frank.