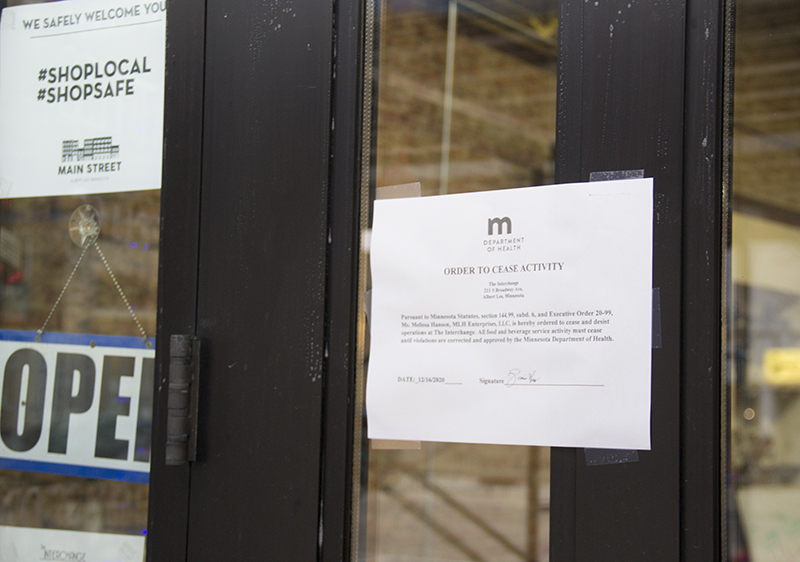 The Minnesota Department of Health on Friday served The Interchange Wine & Coffee Bistro with a cease-and-desist order for reportedly violating the state’s executive order suspending in-person dining because of the COVID-19 pandemic.

The Department of Health inspected the Albert Lea restaurant Wednesday and found the establishment was open for on-site consumption of food and beverages, and the operator indicated the business would continue to allow on-site consumption, according to the state health agency.

A cease-and-desist order essentially orders the business to cease operations until violations are corrected and approved by the Department of Health.

Minnesota restaurants have been ordered to pause indoor dining since Nov. 18 in an effort to curb spread of COVID-19, and Minnesota Gov. Tim Walz on Wednesday announced he extended that order through Jan. 11.

The Interchange owner Lisa Hanson said Friday afternoon she plans to continue keeping her business open despite the order.

“When I started this, I started it to finish it,” Hanson said. “I’m in it for the long haul here. As long as I can be open, I’ll be open. We’re going to fight this thing.”

She said she planned to continue with live music planned for 5 to 8 p.m. Friday, or for as long as people wanted to stay. She has received many reservations and as of 3 p.m., she estimated she had enough people coming to be about two-thirds full.

Hanson on Wednesday said she decided to reopen the restaurant for indoor dining after nine months of closures or restrictions.

“We’re basically out of money,” said Hanson, who has owned the business for seven years. “It’s either we open up now and maybe survive or we’re going to end up closing our doors permanently because we just can’t survive on being shut down — it doesn’t work.”

She said about 95% of her business comes from customers who dine in at the restaurant. When dining in was restricted for restaurants, she said they did everything they could do to make up the difference — offering delivery, curbside pickup and online ordering — but it wasn’t enough.

“We were losing money on a daily basis,” she said.

On Friday she said data does not show that restaurants and bars are a major source of COVID-19 infections. She noted she and her husband spent hundreds of hours researching COVID-19 from experts, including statistics from the Centers for Disease Control and Prevention, the World Health Organization and several doctors.

“There’s just no data to back what they’re doing,” she said.

She said Walz’s announcement Wednesday to extend the pause on restaurants and bars for in-person dining was confirmation to her that she did the right thing by opening back up.

She encouraged other businesses who have been closed to reopen for in-person dining if they can and to band together and be one voice to let the governor know they need to be open for business.

She said Walz needs to pay attention to the people in the state and remember that he works for the people.