‘This is about more than us’ 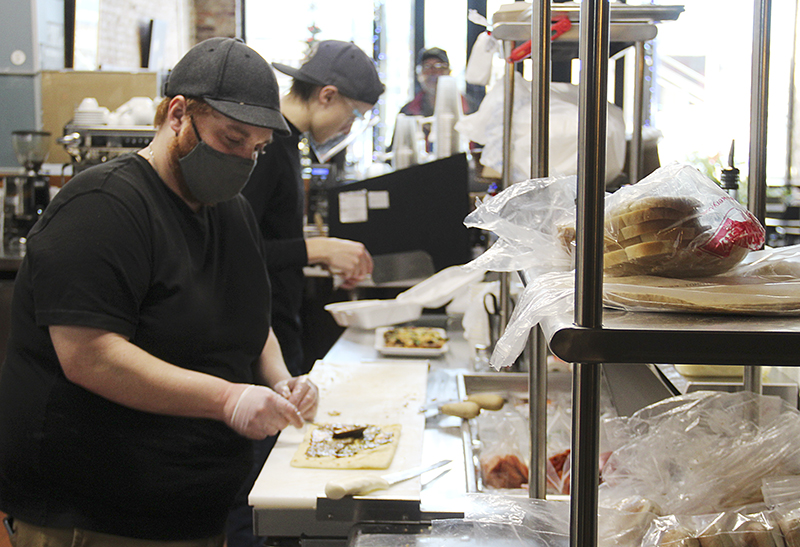 An Albert Lea business reopened for in-person dining on Wednesday in defiance of state COVID-19 restrictions on bars and restaurants.

Lisa Hanson, owner of The Interchange Wine & Coffee Bistro in downtown Albert Lea, said at the start of the pandemic when the state closed down restaurants, it was supposed to be for two weeks, but that has turned into nine months of either closures or restrictions.

“We’re basically out of money,” said Hanson, who has owned the business for seven years. “It’s either we open up now and maybe survive or we’re going to end up closing our doors permanently because we just can’t survive on being shut down — it doesn’t work.”

Hanson said about 95% of her business comes from customers who dine in at the restaurant. When dining in was restricted for restaurants, she said they did everything they could do to make up the difference — offering delivery, curbside pickup and online ordering — but it wasn’t enough.

“We were losing money on a daily basis,” she said.

She estimated the business has lost about 60 to 90% of its revenue at different periods throughout the year and has had to let go seven to eight employees.

“We have cut every expense, we’ve minimized everywhere we can,” she said. “Even with the loans and the grants. It hasn’t been enough.”

She said the business received $39,000 in loans and grants, including the paycheck protection program loan, a county grant and a state grant. It applied for an additional one but did not qualify for it. Those funds — and more — have been spent.

“We have to be able to do what we do to survive,” she said.

The bistro opened at its typical time at 7:30 a.m. Wednesday, and at about 9 or 10 a.m. she said there were people lined up to the door and beyond. The line didn’t die down until about 3 1/2 or four hours later.

Hanson said a big portion of those customers were sitting down and dining in.

“Everyone that’s come in today has been nothing but support,” she said, noting people have said they are praying for them and hope other businesses follow suit with what she has done. “The support was overwhelming.”

While she does have some fears about reopening, she said she has done her research and gotten information from other groups she belongs to. She knows the risks and simply hopes it can be a launching pad for other businesses that have been shut down.

She said Gov. Tim Walz’s announcement Wednesday to extend the pause on restaurants and bars for in-person dining was confirmation to her that she did the right thing by opening back up.

She encouraged other businesses who have been closed to reopen for in-person dining if they can and to band together and be one voice to let the governor know they need to be open for business.

She said Walz needs to pay attention to the people in the state and remember that he works for the people.

Hanson said the business will maintain its regular hours from 7:30 to 3 p.m. Mondays through Fridays and from 9 a.m. to 3 p.m. Saturdays. It is looking to also be open one evening a week.