Thomas Eugene ‘Tom’ Benson passed away peacefully December 7, 2020, with his wife, Pat, by his side and surrounded by the love of his family and friends. He was 85 years old.

A private family funeral was already held. A recording of the service will be on his obituary page. Pastor Jeff Phelps of Crossroads Church will officiate.

Tom was born in Albert Lea, MN, on June 17, 1935, to Harold and Phyllis (Hanson) Benson. He grew up in Geneva until the 8th grade, when the family settled in Clarks Grove. In 1953, Tom graduated from Albert Lea High School and went on to barber school in Minneapolis. After graduation, Tom worked as a barber alongside his dad in Clarks Grove before joining the Navy in 1956, where he served on the repair ship USS Tutuila (ARG-4) and sailed to several ports in the Caribbean. In December 1958, he was united in marriage to the love of his life and wife of nearly 62 years, Patricia Petersen. Together Tom and Pat raised three children, Jay, Lyn, and Pete. 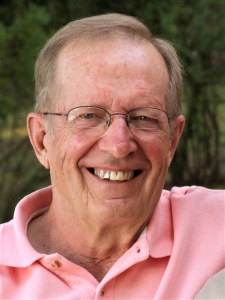 For over 20 years, Tom barbered in Hartland. He was proud to be a small business owner and an active part of community life. Folks sat in his shop for hours just to chat and hear his jokes. In 1984, Tom stepped away from barbering and became a rural mail carrier for the New Richland area.

Tom enjoyed gardening, bicycling, raising homing pigeons and “rollers,” feeding backyard birds, playing autoharp, and singing in the Harmony Junction Barbershop Chorus. Tom and Pat spent a week up north each August for more than 20 years with their children and grandchildren. They also took annual trips to North Carolina and Palm Springs to see family and escape a few weeks of winter.

Tom loved his Lord and was active in church from his childhood onward. He belonged to many Bible studies in their congregations and with Hartland friends. Tom was kind, social, and a natural caregiver. He visited local nursing homes to connect with friends and cut hair. He spent time with his family at every opportunity and he absolutely loved each of his children and grandchildren.

Tom’s family is grateful for his example of doing life with love, faith, tenderness, humility, and humor. He was all we could ask for as a husband, dad, and grandpa. He constantly supported each of us through life’s best and worst. He will be missed and his mark on our lives never forgotten. May you rest in peace in God’s presence.

Tom is preceded in death by his parents, Harold and Phyllis Benson, and brother, Don Benson.