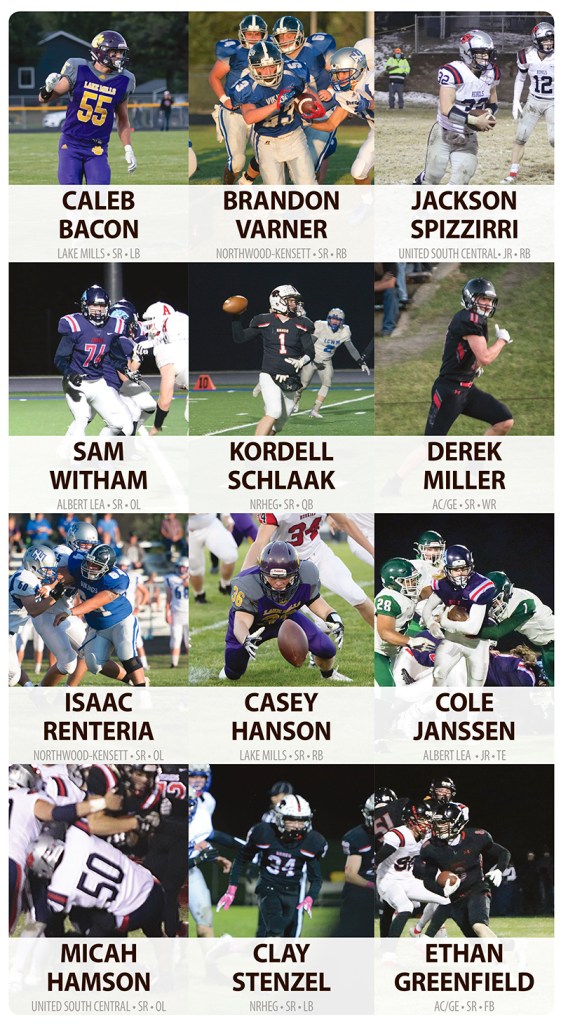 The 2020 fall season has presented many challenges to all area athletes. While some have enjoyed a full season, other teams have only been allowed to play a handful or less of games.

Regardless of the number of games they played, there are numerous athletes in the area deserving of high praise for their performances this season. Here is the Tribune’s All-Area football team:

Bacon not only led his team in tackles and the area in total tackles, but the senior led the state of Iowa in classes A through 4A. Playing in eight games, Bacon missed one game and played the final two in a cast. He was named the district’s Defensive MVP for the second consecutive season. He also added one fumble recovery and an interception from his linebacker position.

According to Lake Mills head coach Bill Byrnes, Bacon is a Division 1-level talent for college prospects, and he is excited to see where he ends up.

Greenfield was a presence both offensively and defensively for the Knights in his season campaign. While the Knights played seven games this season, Greenfield’s year was cut short due to injury, but he put up competitive numbers before going down.

Greenfield had 173 rushing yards on 38 carries, while racking up 46 tackles and three sacks. He was averaging 12 tackles per game before falling to the injury.

Knights head coach Casey Soost said Greenfield was the emotional leader of the team this season, and he was greatly missed after his injury.

Schlaak was a driving force in the Panthers lineup this season, throwing for 505 yards and six touchdowns in just four games this season. The Panthers’ season was put on hold in the middle of the year, but Schlaak made the best of it, also rushing for 150 yards and picking up 14 tackles on defense.

Had NRHEG been able to play a full season, Schlaak was on pace to throw for over 1,000 yards. Head coach Marc Kruger said Schlaak was the leader of the team and had an outstanding year.

While the Tigers season was plagued with cancellations this year due to COVID-19, Witham was a consistent role player for the team. Playing in three games, the least of any area team this season, Witham came away with eight solo tackles and one assisted tackle. He was a mainstay on both the offensive and defensive lines for Albert Lea.

The Tigers went 0-3 this season and were unable to participate in the section playoffs due to the school transitioning to distance learning.

Another fixture on the offensive and defensive lines, Renteria amassed 16.5 total tackles and an assisted sack from his defensive position. Renteria also earned high praise from Capitani, saying he was the team’s best lineman and the guy they wanted to run behind most of the time.

The Vikings played in eight games this season and were defeated by North Iowa 38-36 in the first game of postseason play.

Spizzirri was one of two juniors to be named to the All-Area team this season. Suffering a broken elbow in his sophomore season, Spizzirri came back with a nice junior season of 554 yards on 114 carries and three touchdowns, while adding 149 receiving yards and another two touchdowns through the air.

Janssen had six catches for 74 yards in Albert Lea’s offense, which saw only three games this season. Had the Tigers been able to play a full schedule, Janssen was on pace for around 150 receiving yards.

Hanson led the area in rushing yards with 919 on 121 carries. He ran for 11 touchdowns and caught one more to bring his season total to 12. Byrnes said Hanson played his best games against some of the best competition in their class, having 162, 163, 154 and 129 yard games against ranked opponents.

Hamson was second in the area in total tackles with 75. Not only did Hamson lead the Rebels in tackles this season, but also led in 2019 and was near the top in 2018. Offensively, Hamson started at guard and center and was a big part of the Rebels’ success in running the ball.

Neseth said Hamson was a key in the middle of the defense for the past three seasons and his production will be hard to replace in the coming years.

In four games, Stenzel had 44 tackles, two sacks and one fumble recovery from his linebacker position. Before NRHEG’s season was put on hold, Stenzel was the district’s leading tackler and was in the top-20 in the state.

Kruger said Stenzel was a huge part of the defense for the Panthers this season and was critical in the big win over GFW, who went on to win the section.

Miller led the Knights with 204 receiving yards on aa catches, while also pulling in three touchdowns. Defensively, Miller had 24 tackles and totaled more than double the interceptions of any other player in the area with five.