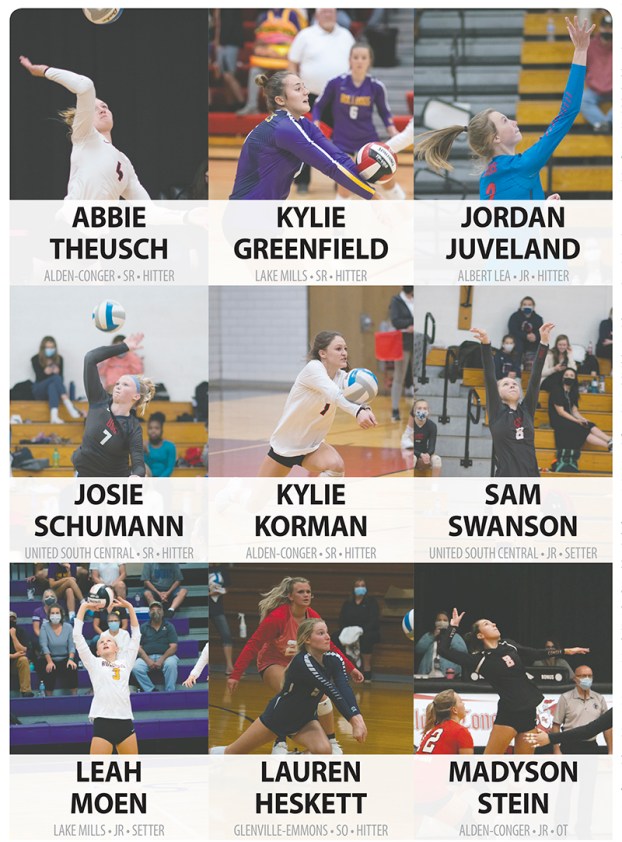 There was a wide range of games played between the seven volleyball teams in the Tribune’s coverage area. From 35 matches played by the Lake Mills Bulldogs down to just six matches played by the United South Central Rebels, the COVID-19 pandemic threw a wrench in the plans of many high school teams this fall.

Nonetheless, there are many girls from the area deserving of recognition for their play this season. Here are the Tribune’s selections for the top players this season:

Greenfield racked up a long list of accomplishments during her time as a Bulldog. Not only did Greenfield lead the area in kills with 302, she also led the area in digs with 168, proving she could get things done both offensively and defensively. She was named to the Top of Iowa West All-Conference team for the third-consecutive year, the fifth player in Lake Mills history to achieve that honor; and was the Conference Player of the Year for the second consecutive year, the third player in the history of the conference to do so.

“She plays the game with a lot of passion and has high expectations for herself on the court,” said Lake Mills head coach Jim Boehmer. “For her to be selected first team three times is a rare feat and something that few have done over the years.”

Had the Knights been able to play a full season this year, Theusch was on pace to be the leader in many statistical categories. Theusch finished second in the area in kills with 177, a number which she racked up in only 11 matches. She also added 113 digs and 10 assists.

Head coach Jolene Bute had high praises for Theusch and said she will be a hugley missed presence on next year’s team.

“She is hands down the best hitter I have had here at Alden-Conger,” Bute said. “She has a super hard swing and is extremely quick on offense and defense … Abbie’s knowledge of the game and her extreme athletic abilities will be greatly missed next year.”

Schumann played in only six games with the Rebels through her senior campaign, but she made them count. In her six matches, Schumann totaled 70 kills, 32 blocks and 46 digs. With 32 blocks, she was second in the area and would have found herself at the top of the list in kills had she been able to play a full season.

“Josie did it all for us,” said head coach Joe Kuechenmeister. “She’s been a tremendous presence at the net for the past several seasons, but she took her game to the next level this fall as a six-rotation player. Jo’s aggressive arm swing and ability to run a quick tempo attack made her our toughest offensive option and her blocking vision and anticipation in the back row made her a stingy defender as well.”

The only sophomore to make the first team, Heskett was a pivotal part in the Wolverines attempts to turn the corner in the program. In just seven matches this season Heskett totaled 51 kills, 110 digs, six blocks and 15 aces.

Glenville-Emmons head coach Krystle Belshan said Heskett is an outstanding player and was very consistent for being a first year varsity player.

“She is an extremely handworker,” Belshan said. “She is always the first and last to leave practices and is always asking how to improve her skills. I am so proud of how she has been asked to play different roles on the team, some she has never played, and does it with a smile and 110%.”

The Tigers were another team that had the number of contests cut short due to the COVID-19 pandemic. However, Juveland was a bright spot for the Tigers in their eight games this season. With stats from one of the matches missing, Juveland totaled 49 kills, 16 block assists and eight ace serves.

“You could always count on Jordan to put the ball on the floor no matter where the set was placed,” Cameron said. “She is able to read the defense and place balls in open positions… Jordan’s positive attitude and hard work inspire her teammates to be better.”

Korman, along with teammate Theusch, made for one of the most formidable front lines in the state. Totaling 110 kills in just 11 games, Korman finished third in the area. She also notched 113 digs, 10 blocks, 19 aces and 10 assists in her senior campaign.

Bute said Korman will be greatly missed next season and will be difficult to find a replacement for.

“Kylie was also a very effective outside hitter,” Bute said. “She was nour lead off server and played six rotations for us.”

Totaling 119 assists in just six games, Swanson was on pace to be near the very top of the leaderboard had she been able to play a full season. She also tacked on 17 kills, 15 digs and four aces from her setter position.

“Sam did a nice job transitioning from a hitting role last year to being the primary setter in our 5-1 offense this fall,” Kuechenmeister said. “She has naturally soft hands and quick feet to the ball, making life much easier on both our passers and hitters. Sam did a nice job of mixing the ball around this season, earning her hitters 1 on 1 situations at the net, and keeping opposing defenses off balance. She’ll be tough coming back next season after another year of experience in the setting role.”

In her junior year and first year as a starter, Moen led her conference in assists, was second in assists per set and was third in serving percentage. She also led the are in total assists with 631 in 34 games for the Bulldogs.

“Her defense has gotten strong and her ability to track the second ball has improved as well,” Boehmer said. “As a junior, to step in as our starting setter and be selected first team says a lot about her skill set.”

The third Knight to be selected to the first team, Stein was the runner up in the area in assists with 324, a number which she totaled in only 11 matches. She also had 45 kills, 57 digs, 16 aces and eight blocks throughout her junior season.

“Mady was a great part of our team’s success this year,” Bute said. “She has really started to

learn the game.She was our setter in a 5-1, hitting in 1 rotation to mix things up a bit. She also has a very aggressive serve. Excited to have her back to see what she can do for us and help lead the charge next year.”

MSHSL approves plan for the return of winter sports season

The Minnesota State High School League approved a flexible plan for the restart of winter sports at its board of... read more