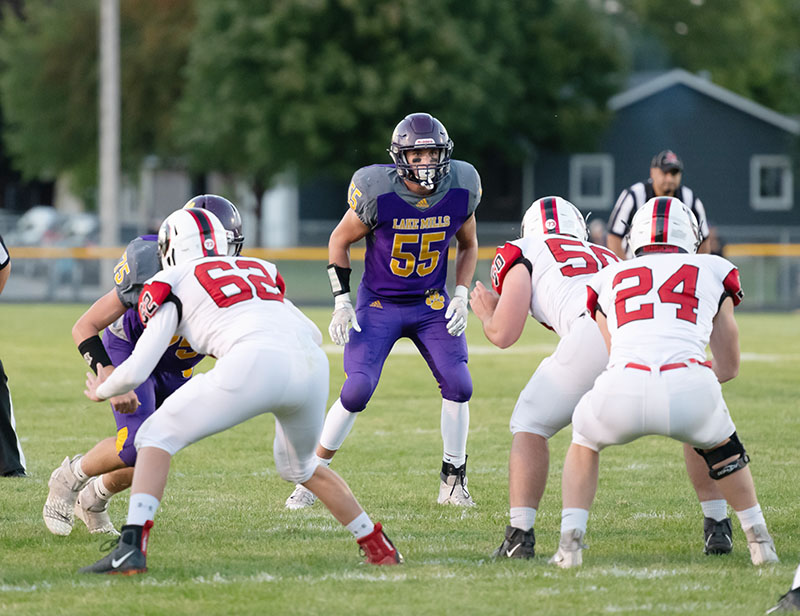 Caleb Bacon led Class A and was the third-leading tackler in the state with 103 total tackles, 90 of which were solo tackles. - Lory Groe/For the Albert Lea Tribune

Lake Mills senior Caleb Bacon was a force to be reckoned with this season as one of the main leaders on a Bulldogs team that had its best season in recent memory.

Not only did Bacon lead the area in tackles, he led the entire Class A and was the third-leading tackler in the state of Iowa with 103 total tackles.

In nine games this season, Bacon totaled 103 tackles, 90 of which were solo, seven tackles for loss, one fumble recovery and two interceptions from his linebacker position.

In the seventh game of the season, Bacon suffered an injury to his wrist. He had a slight fracture  that required a cast. Despite a bulky cast, Bacon played through the injury in the final two games of the season.

“I ended up playing our last two  games with a cast,” Bacon said. “Some of the adjustments I had to make were just how I tackled. I basically only had one hand free so it was a little more difficult to grab onto jerseys and players. Also, I just had to get used to running and moving with a big bulky cast and padding on.”

Lake Mills head football coach Bill Byrnes said Bacon came into the program as a pretty skinny freshman, but over the course of two years, Byrnes said he transformed into one of the most dominant players he has ever seen in his 36 years of coaching. 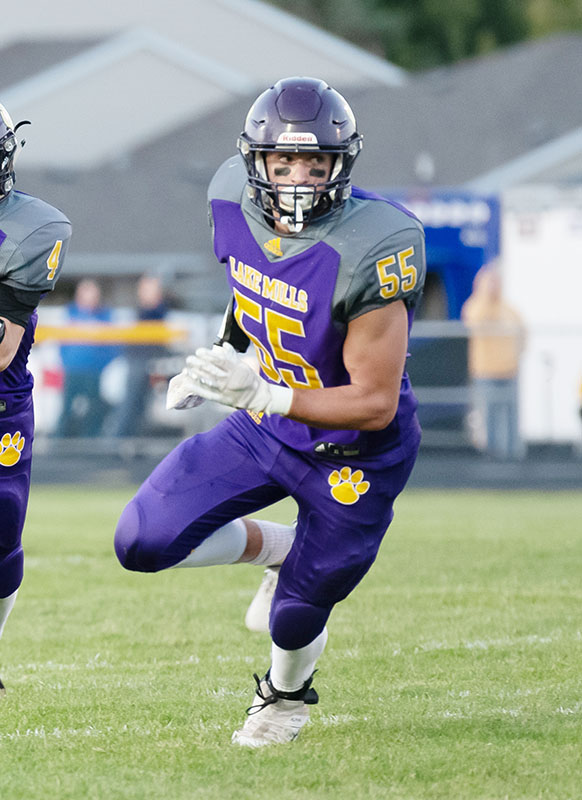 Bacon accepted a preferred walk-on position at Iowa State University, where his ultimate goal is to earn a scholarship. – Lory Groe/For the Albert Lea Tribune

“Caleb was just different on the field than most other kids in the way he finished tackles and pursued to the ball,” Byrnes said. “Caleb still had to learn the techniques and schemes, but the physical part of football was easy for him.  He likes to joke around a lot, but when it comes time to practice and play, he was ready. Caleb used his hands-on defense better than anyone I have seen or coached.”

Byrnes said Bacon was the type of teammate that made the players around him better. He was a player that his teammates expected to always play at a high level when he was on the field.

It was those qualities, among many others, which led to Bacon being selected to the Class A All-State team for the second consecutive year. Bacon becomes the ninth player from Lake Mills to earn multiple All-State honors. He was also named the captain of the All-State team.

“It’s a huge honor, especially with some of those names up there,” Bacons said. “It’s something I really pushed myself to accomplish last year. This year I wanted to do it again and push myself even more to be selected as the class A captain as well.”

Although the Lake Mills football program was never forced to shutdown because of the pandemic, Bacon said it still wasn’t  a normal year.

“A lot of our team’s mentality was to take the season one game at a time because we could get shut down at any moment,” Bacon said. “A lot of things changed in practice and film with wearing masks and disinfecting our gear. Things with recruiting also changed, like not being able to take any official visits to D1 schools.”

Bacon has decided to accept a preferred walk-on offer from Iowa State and will begin his collegiate journey in the fall. He said his goal is to ultimately earn a scholarship.

“I will have to work very hard to prove myself and to earn one, but I am up to the challenge,” Bacon said.

Byrnes said Bacon is a hard worker and expects with the right coaching, he will have a real chance to play at the next level.

“(He’s) a hard worker, good lifter, and wants to work to improve and give himself a chance,” Byrnes said. “I think he understands it is up to him to make it at the next level and I feel he understands what that is going to take.”