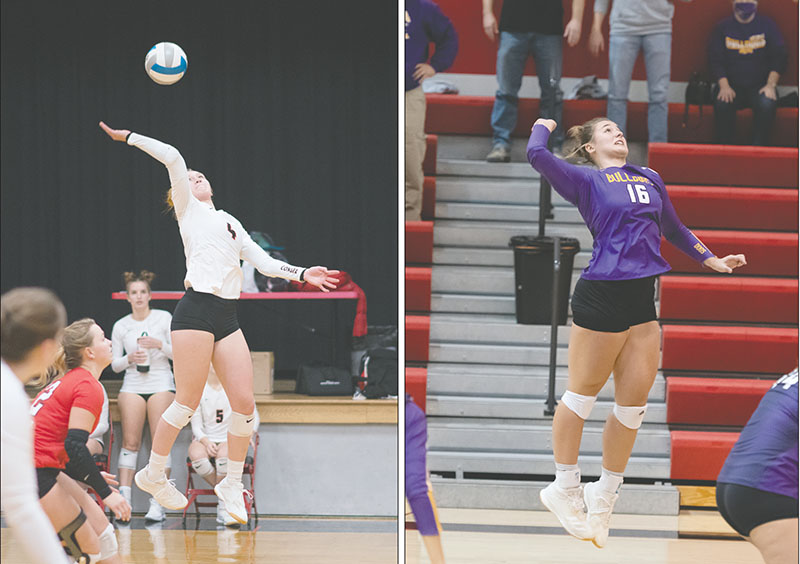 There were a number of good volleyball players in the area this season. However, two of them stood head and shoulders above the rest.

Alden-Conger senior Abbie Theusch was only able to play in 11 matches this season thanks to the season being cut short due to the pandemic, but her play in those 11 matches had her on pace to be at the top of many statistical leaderboards.

Greenfield said the biggest challenge this year was the possibility of the season being canceled at any given moment or possibly not having a season at all. She said it was a heartbreaking thought, but one she needed to be ready for in case it became reality.

“The team could be at practice, gearing up for a game and get the news that our season was over,” Greenfield said. “Anything was possible and the team had to be ready. This year really took the saying ‘leave everything on the court’ to a new extreme because any game or practice could have been my last. I am so thankful that I got a senior season and one last opportunity to play in a Lake Mills jersey.”

“Kylie has as much passion for the game as anyone I have coached and that passion was a critical component of her success and our team success,” Boehmer said.

Greenfield said the highlight of her season was beating Aplington-Parkersburg on the road in the regional tournament. She said the team came in as an underdog and the energy in the gym was unlike anything she has felt before.

After her senior year at Lake Mills, Greenfield plans to continue her volleyball career at University of Wisconsin-Platteville. She said her goal at the next level was to make an impact on the team, whether it be one the court or from the sidelines, she was ready to embrace her new role with a new team.

“I have loved every second of being a Lake Mills volleyball player and it is an experience that will stay with me my whole life,” Greenfield said. “I am so thankful for the opportunities I have been given and would not be the same player without the mentoring of my coaches and parents.

“For the younger bulldog players, really enjoy every moment you are given out on that court. It is such an impactful experience that should never be taken for granted. Always know that you have the best community behind you, full of supporters who will be proud of you no matter what the outcome. Go Bulldogs!”

While playing in only 11 games this season, Theusch rocketed up the leaderboards totaling 177 kills, second in the area, 113 digs, 10 assists, 10 blocks and 19 aces.

Theusch said it was tough for her not to be able to play her season in full. The back and forth of at the beginning of the season about when and if they would be able to play took it’s toll, according to Theusch.

“We started off practicing in the summer without knowing if we would even have a season,” Theusch said. “Then we found out we would have a spring season. Soon after that decision was made, they decided to let us play in the fall but without any fans. Then they decided we could have fans, but they would be limited.

“It was tough to constantly question what the future would hold. The best way I found to overcome this challenge was to simply go to every practice and play every game like it was my last.”

That mindset worked out as Theusch dominated and led the Knights to a 10-1 overall record, with their only loss coming in a five-set thriller against a tough Cleveland opponent.

“This past season she developed her knowledge of the game,” Bute said. “She really started to understand when to change up her swing and how to place the ball better. A couple of years ago I had made the comment at our year-end banquet that Abbie is capable of being the best hitter I have had so far at Alden-Conger and she definitely lived up to it.”

Bute said Theusch is set apart from other players because she can totally take over a game,

Theusch said the highlight of her season was going undefeated at home and being crowned the conference champions. She said she doesn’t have plans on playing in college, but will be attending the University of South Dakota in the fall to major in mathematics.

“I hope by the time next season comes around things will calm down a bit, so that the next group of seniors get the ‘lasts’ that they deserve,” Theusch said.