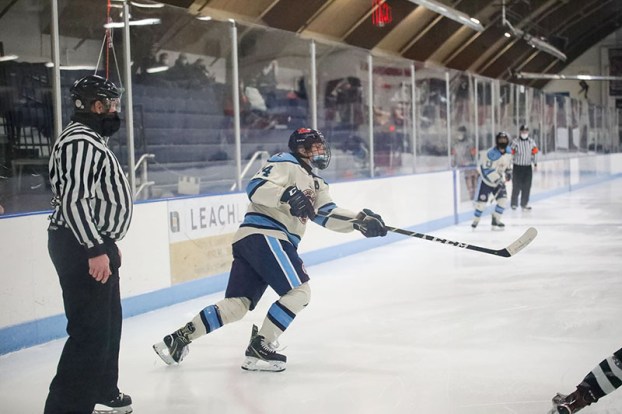 Albert Lea senior Logan Hacker assisted on the first goal of the game against Faribault Thursday night. The Tigers beat the Falcons 3-1, grabbing their first win of the season. - Kelly Hendrickson/For the Albert Lea Tribune

The Tigers took advantage of two power-play opportunities in the first period to jump out to an early lead. Despite a late comeback attempt by the Falcons, the Tigers held on to claim their first victory of the season 3-1.

Faribault was called for its first penalty of the game just under seven minutes into the game. Unfortunately for Albert Lea, the two-minute power play did not result in any goals.

It was the second penalty committed by the Falcons, a five-minute boarding call, that gave the Tigers the advantage. 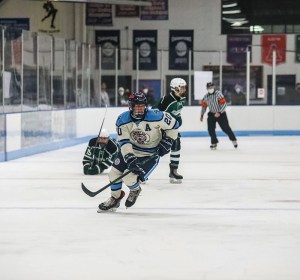 Albert Lea senior Logan Barr makes his way up the ice Thursday against Faribault. Barr scored a goal in the third period of the Tigers 3-1 victory. Kelly Hendrickson/For the Albert Lea Tribune

The first goal was scored by senior Blake Ulve and was assisted by fellow senior Logan Hacker and sophomore Tim Chalmers.

Chalmers found the back of the net himself less than two minutes later when he scored a goal, this time assisted by Ulve.

Albert Lea went into the first break with a 2-0 lead and a 10-5 shots-on-goal advantage.

The second period was largely uneventful for both teams. The biggest moment of the period came with 2:22 left, when a Faribault player was called for checking from behind and misconduct — a penalty totaling 15 minutes in the box.

While the Tigers weren’t able to score during the lengthy power play, being up one guy was enough to bolster the defense and prevent the Falcons from scoring any goals. The Tigers got off 12 shots on goal in the period, compared to six by the Falcons.

Nearly five minutes into the third period, the Falcons closed the gap by scoring their first goal of the game, cutting the score to 2-1 in favor of the Tigers. Things got a little dicey when senior Dylan Carlson was called for an elbowing penalty with 10 minutes left to play, giving the Falcons a power play opportunity. However, the power play came and went for the Falcons, leaving them with nothing to show for it.

Senior Logan Barr all but cinched up the victory in the final two minutes of the game by scoring an unassisted goal to take a 3-1 lead.

Senior Sam Witham was called for a tripping penalty with one minute remaining, but it had no effect on the outcome of the game.

Albert Lea out shot Faribault 32-17, with the Tigers adding eight in the final period to the Falcons’ six.

The Tigers move to 1-1 on the season and will be back on the ice Saturday, taking on the Winhawks of Winona/Cotter.