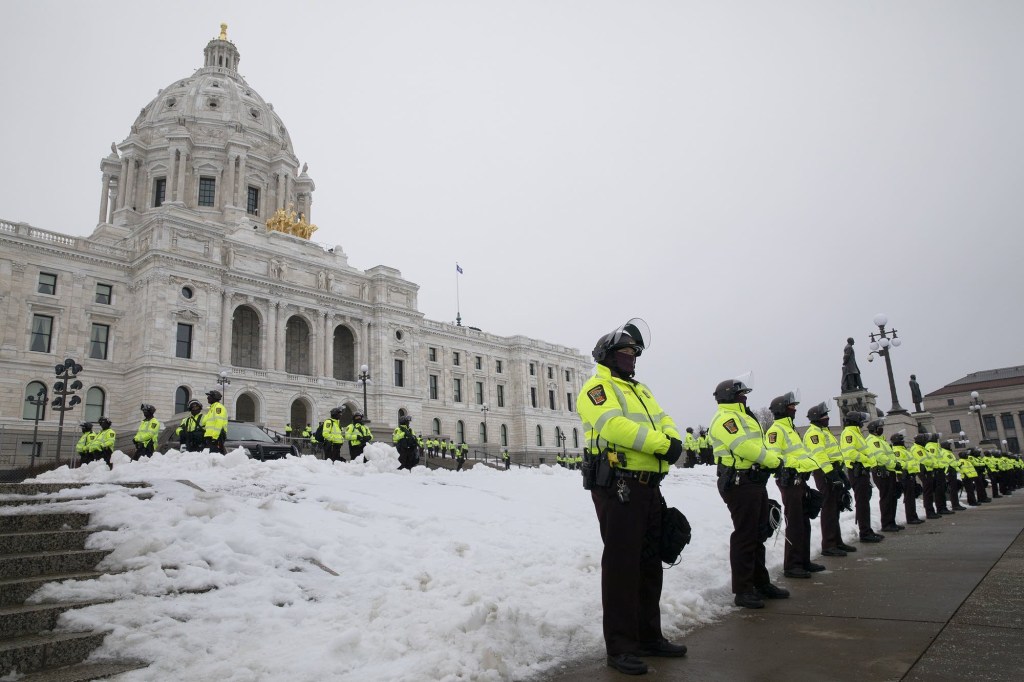 State troopers in riot gear line up in front of the Minnesota State Capitol on Sunday in St. Paul. A small group of people demonstrated in support of President Donald Trump as a heavy presence of law enforcement were on guard for possible violence. Christine T. Nguyen/MPR News

Minnesota lawmakers return Tuesday to a fortified Capitol with their 2021 session in full swing.

State capitols around the country are still on alert for potential disruptions ahead of the presidential inauguration in Washington. In Minnesota that means National Guard members, State Patrol officers and other personnel lined up on the complex grounds and barriers around most routes in.

Behind that security cordon, there will be in-person legislative activity this week, including several hearings focused on another pressing issue: COVID-19.

The Capitol building itself has been locked down and will be for much of this week. Gov. Tim Walz said Monday that there are no known credible threats but public safety advisers aren’t leaving anything to chance.

“At this point in time our plan is to keep our posture in place through the inauguration, reevaulate after that,” Walz said.

Over the weekend, it was pretty calm.

Protest attendance was measured in the dozens rather than the mass events officials were on guard for. The large presence of law enforcement and a cutoff of traffic in the area probably discouraged any rowdiness.

The governor was set to meet Tuesday morning with top House and Senate leaders.

Walz and Lt. Gov. Peggy Flanagan intend to push for longer-term security enhancements in the weeks ahead.

Walz is set to lay out a new budget next week and plans to include more money for Capitol complex security in that.

Minnesota allows people with permits to carry firearms in the Capitol. It’s been a source of friction for years between those who deem it a right and those who say armed visitors cause intimidation.

Flanagan, who chairs an advisory panel on Capitol security, said a renewed debate is overdue.

“I think we are ready to have this conversation. What we witnessed — the attack on the Capitol in Washington D.C., and the tensions that we’re feeling now — it’s time,” Flanagan said.

That kind of discussion could eventually bubble up to the Legislature and any gun restrictions could be difficult to enact given the split-party control.

When it comes to the pandemic, tensions are also running high.

Even though Walz extended his emergency declaration last week that continues his peacetime executive powers, lawmakers want a say in more of the public health decisions.

Republicans say now that the Legislature is back in regular session, the administration should come through them when deciding how to spend money dedicated to the COVID-19 fight.

Millions of dollars that haven’t been spent from prior allocations and a lot more money is flowing in from recent federal legislation. The new Biden administration could push for additional state and local government help, a prospect that’s improved now that Democrats also control both chambers of Congress.

Past moves by the Walz administration are under scrutiny. That includes $40 million that was set aside for vaccination efforts; top Republicans say they deserve a more detailed plan for where that money will go.

Other parts of the pandemic response are getting fresh examination, too — from its impact on schools to behavioral health programs to transportation.

The Senate Judiciary Committee has a hearing scheduled for Wednesday to review the penalties allowed and imposed under the Walz executive orders.

GOP lawmakers have bristled at the fines and potential criminal penalties lodged against people and businesses that defy the restrictions. A bill on the agenda would bar the governor from establishing gross misdemeanor offenses through executive order.

And there are several hearings around the ongoing vaccination effort.

Legislators are getting antsy about how fast the vaccine rollout is happening, echoing concerns they hear from their constituents.

Here’s the difficulty: There are multiple demographic or occupational groups that lawmakers and the public want pushed up in line, but only so many shots to be had.

Walz announced a new pilot program Monday for community vaccination sites that will serve people older than 65 and education-sector workers.

There are limited supplies but getting the nine sites up and running will be key when allotments of doses to Minnesota and other states pick up.

At least for now, there is no walk-up availability at these new vaccination sites. State officials say only those with appointments arranged through an online or phone portal will be served.

House Health Finance and Policy Committee Chair Tina Liebling, DFL-Rochester, will hold a hearing Wednesday to review Minnesota’s vaccination schedule. She said the worst thing officials can do is set expectations they can’t deliver on.

“The last thing we want is older people lined up waiting to get vaccines or just having their hopes dashed about getting a vaccine,” Liebling said. “We all need to continue with these restrictive measures that we’ve had: We need to stay indoors. We need to wear a mask. All of those things have got to continue. Unfortunately they’re going to continue for quite some time.”