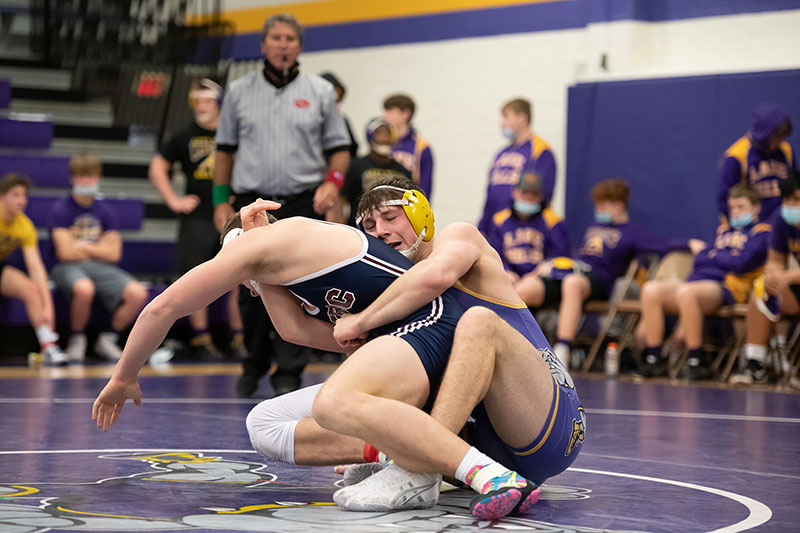 Lake Mills senior Elijah Wagner fights to keep his North Butler-Clarksville opponent off his feet Satruday at home. Wagner won the match in a first period fall and went 4-0 on the day with two pinfalls. - Lory Groe/For the Albert Lea Tribune

It was an up and down tournament for the Lake Mills wrestling team on Saturday, but they were able to win their home dual tournament.

The Bulldogs opened the day with Southeast Polk JV and produced their weakest effort of the season, escaping with a 40-39 win.

After the poor showing and some discussion with the coaching staff, the Bulldogs rebounded to wrestle much better the remainder of the day. Victories over North Union (75-6) and Garner-Hayfield-Ventura (78-6) were led by numerous pins by a more aggressive approach.

Lake Mills finished off the day by taking care of North Butler-Clarksville, 59-24.

“Our kids wrestled much better after the first dual,” Brandenburg said. “They stayed aggressive while minimizing mistakes.” 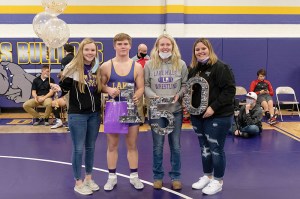 Senior Casey Hanson reached a significant milestone as he won his 150th career match when he pinned Cole Negen of North Butler-Clarksville. Hanson, a returning state place winner, became the sixth in the history of Lake Mills wrestling to reach that mark.

Despite improving to 20-0 on the season, the No. 4-ranked Bulldogs know they must get better to have postseason success.

“Today was an eye opener for the team,” Brandenburg said. “Hopefully our kids realize they need to give their best effort every time out, as well as get better everyday in practice.”