Carol Lucille Foster, 96, of Albert Lea, MN passed away peacefully surrounded by loved ones in her home on January 26, 2021. 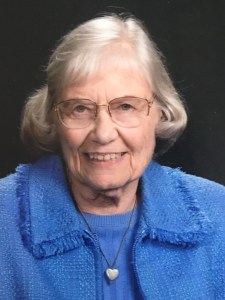 Carol and her husband Charles (Chuck) Foster, retired Air Force Lt. Col. celebrated their 75th wedding anniversary on June 2, 2020. They were married in 1945 when Chuck was serving as a pilot in WWII and Carol, who had attended the University of Northern Iowa, was also contributing to the war effort working in the John Deere tractor plant as they built tanks. This era shaped their lives together and they still liked to dance to the big band songs of the 1940’s.

Carol was born on October 17, 1924. the oldest of four children of two teachers, Harris and Lucille Garrett of Waterloo, Iowa. Her family instilled in her a love of learning, a gift of writing and appreciation of poetry, especially Robert Frost, which she recited joyfully.

Carol is loved by her family, Charles, who survives her, along with son Steven, daughter Karen and husband Rolf, grandsons Lars and wife Becca, and Hans and wife Mary and their children, Carol and Chuck’s beloved great-grandchildren Kaitlyn and Andrew. Carol is also survived by her brothers Jim Garrett and Jack Garrett and their families and is a special Aunt, and Chuck a special uncle, to 23 nieces and nephews, almost all of whom learned to water ski with Carol and Chuck on Fountain Lake.

Carol contributed to the strength of Albert Lea through her work in the Presidents office at Lea College, the Fundraising office for the expanded Naeve Hospital, and her mission and food pantry voluntarism through the First Presbyterian Church and other volunteer roles in the community. She enjoyed friends and family and making new friends on her travels with Chuck in their motor home, single engine aircraft with pilot Chuck and a trip through Europe after the Rotary International Convention. Carol loved to write, camp, water ski and walk in the woods, especially in autumn, her favorite season.

Due to Covid precautions, a service will not be held at this time in Albert Lea. A small family service will be held, along with burial in Washington, Iowa. Memorials may be contributed to further the work of the Freeborn County United Way, the K-1 Kiwanis Club of Albert Lea or the Albert Lea Community Theater.