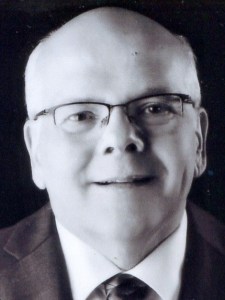 Curt was born in Waseca, MN on August 7, 1953 to Richard and Isabel (Stennes) Frisk. He was baptized through Trinity Lutheran Church at home on the farm near New Richland due to the polio outbreak. He graduated from New Richland Hartland High School in 1971. He graduated from Rochester Junior College and from Mankato State University, where he obtained a Bachelor’s Degree in Business Management.

On May 14, 1977, Curt was wedded in holy matrimony to the love of his life, Joanne Thompson at Cross of Glory Lutheran Church in Hartland, MN. The two lived for a short time in Winona, then back to New Richland, and then to Byron. They raised three children: Jeremy, Benjamin, and Karen.

Curt was very hard working and worked a variety of jobs through the years. From working for Borchart Tiling to banking to plumbing and heating sales, he was very personable and well-liked by his co-workers and customers.

He loved to hunt geese, pheasants, and deer. He and Joanne jokingly ran the “Goose Day Inn,” which was an annual goose hunt with family and friends. He also enjoyed fishing, camping, woodworking, bird watching, and gardening. He was an early riser and loved his coffee (especially egg coffee).

Curt was a teacher at heart. He was always explaining things and teaching his kids and others how to fix things. He enjoyed restoring his brother-in-law’s Ford 8N tractor and was looking forward to completing the project. He always had a project to work on. He was a family man. He loved holding his grandson on his lap, and was excited when he got a chance to feed him Cheerios.

Curt was preceded in death by his parents; his parents-in-law, Herman and Nylene Thompson; brother-in-law, Harlan Schlaak; and numerous aunts and uncles.

A visitation will be held from 4:00-6:00 p.m. on Sunday, January 24, 2021 at Trinity Lutheran Church in New Richland. Funeral Services will be held at 10:00 a.m. Monday, January 25, 2021 at Trinity Lutheran Church, with a visitation one hour before. Pastor Kristen Venne will officiate. Interment will follow at St. Olaf Cemetery. Services will be live streamed on Curt’s obituary page on the Bonnerup Funeral Service website.