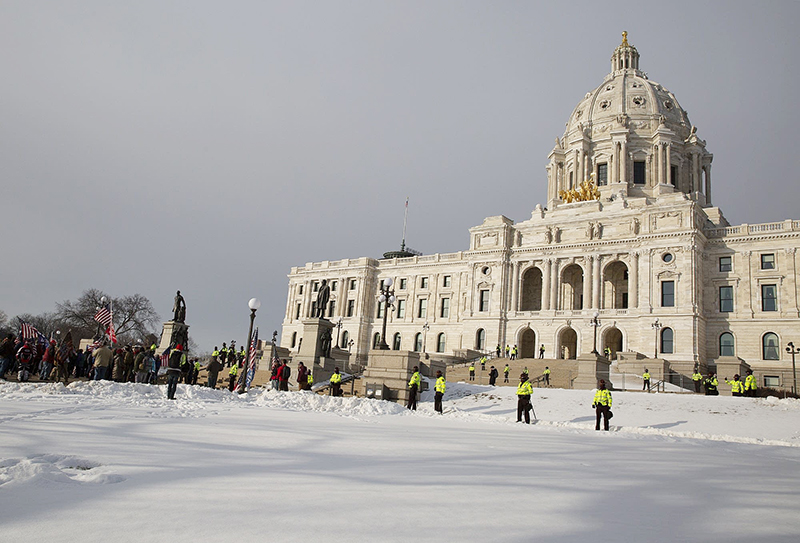 Minnesota state troopers stand guard outside the State Capitol as supporters of President Donald Trump attend a rally on Jan. 6. State officials say they are preparing for potential unrest, after disclosure of an FBI memo that indicates right-wing extremists may be planning more violence in the wake of the attack on the U.S. Capitol. Christine T. Nguyen/MPR News file

The FBI says members of a far-right group that wants to foment a second civil war scouted out the Minnesota State Capitol ahead of a pro-Trump rally planned for this weekend.

A memo to law enforcement from the FBI’s Minneapolis field office says that “a few Minnesota-based followers of the Boogaloo movement” identified police sniper locations and said buildings with snipers would “need to be blown up” to protect Boogaloo fighters.

The Dec. 29 memo, first obtained by Yahoo News, says the group did not plot a specific attack, but would use violence if a fight broke out.

A spokesperson for the FBI in Minneapolis says the bureau doesn’t comment on its internal discussions, but agents are identifying potential threats and are sharing the information with other agencies.

“People who would engage in such lawless behavior need to know that there will be a response and that we’re not going to cower in the corner we’re gonna step up and hold them accountable,” he said.

On Monday, Gov. Tim Walz revealed that state troopers entered the living quarters of the governor’s residence in St. Paul this weekend to evacuate his 14-year-old son as a pro-Trump crowd gathered outside.

On Tuesday, the governor began a three-stop tour of state historic sites to urge Minnesotans to tone down political animosity and work together to protect democracy.

In December, a member of the Boogaloo Bois who participated in protests that followed the police killing of George Floyd pleaded guilty to terrorism charges.

Benjamin Ryan Teeter, 22, of Hampstead, N.C., admitted that he tried to sell gun silencers to an FBI informant who Teeter thought was a member of Hamas.

Michael Robert Solomon, 30, of New Brighton, Minn., is also charged in the case, and is expected to plead guilty in March. Federal prosecutors say Solomon and Teeter offered to work as mercenaries for Hamas in order to fund Boogaloo activities.

The men came to the attention of law enforcement after they were seen carrying guns on the streets of Minneapolis during the unrest in late May.

Another alleged member of the Boogloo Bois, Ivan Harrison Hunter, 26, of Boerne, Texas, is facing a federal riot charge after authorities say he fired an AR-style rifle at the 3rd Precinct police station as it burned.