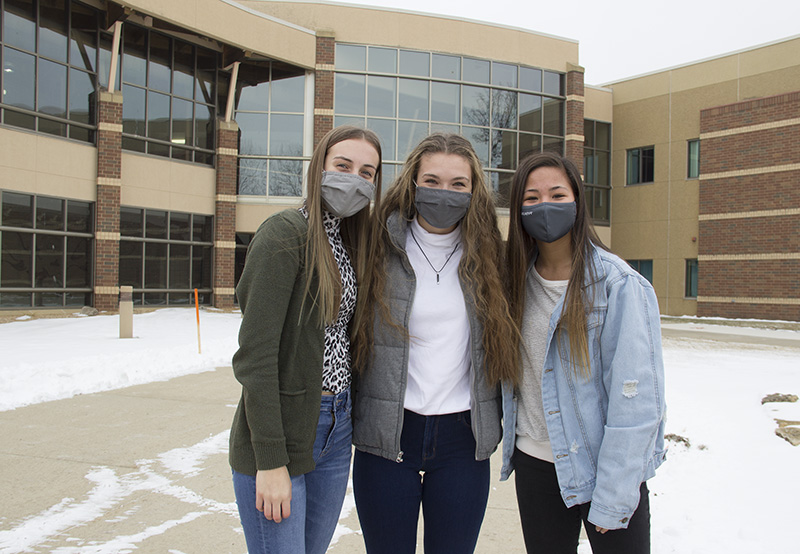 Albert Lea High School students, from left, Taya Jeffrey, Abigail Chalmers and Lucy Stay helped start the Well-Being Club to help erase the stigma around mental illness at the school and to support their classmates and others in the community. Sarah Stultz/Albert Lea Tribune

A group of Albert Lea High School students this fall started an organization to support their classmates and help erase the stigma around mental illness.

Student Abigail Chalmers, 17, said she first emailed her adviser Gina Klennert in October about starting the club because she did not think the issue is talked about enough at the school. Initially, she said, the club was going to be for athletes, but then it expanded to include all students.

A group of students under the name of The Well-Being Club started to meet virtually with Klennert, and then they started to brainstorm other people they thought could help, Chalmers said. The club grew to a couple dozen people and then now has 20 to 30.

The club has different things it plans to focus on, including social media, a blog and, eventually, a talk-show style podcast where students will interview adults and other students. The blog will be a place where the club can put in-depth articles. One writer, for example, plans on writing about setting up appointments and therapy.

“Hopefully, it will be a good resource for people,” Chalmers said.

Member Lucy Stay, 17,  said so far the group met in person a few times and they plan to do so again when they go back to school after the holiday break. It will typically meet before school.

The club has also received attention through social media, especially on Instagram, where its page has over 220 followers.

Club members have also sent out encouraging postcards to others in the student body through the mail and partnered with the Fellowship of Christian Athletes to send holiday cards to nursing home residents.

They are looking for others to partner with in the community, as well.

“That’s ultimately our goal — we just want to help as many people as possible,” said fellow member Taya Jeffrey, 17.

Stay said many people you meet might be struggling with something, and it’s important to have a safe space to talk about it.

People also don’t have to have a diagnosis to be struggling, Chalmers added.

The girls said the club has received overwhelming support from their fellow students and also some parents who have given feedback, and they hope it can continue to grow in the future. Though the club is not an official high school club, she said school administrators have been supportive.

“We’re really open to anyone’s help or anyone’s ideas,” Chalmers said. “We’re always looking for ways to expand our reach. Our complete goal is to help people — not just students — but everyone.”

If people have ideas of how the group can help in the community, they should email chalmersabigail@gmail.com.