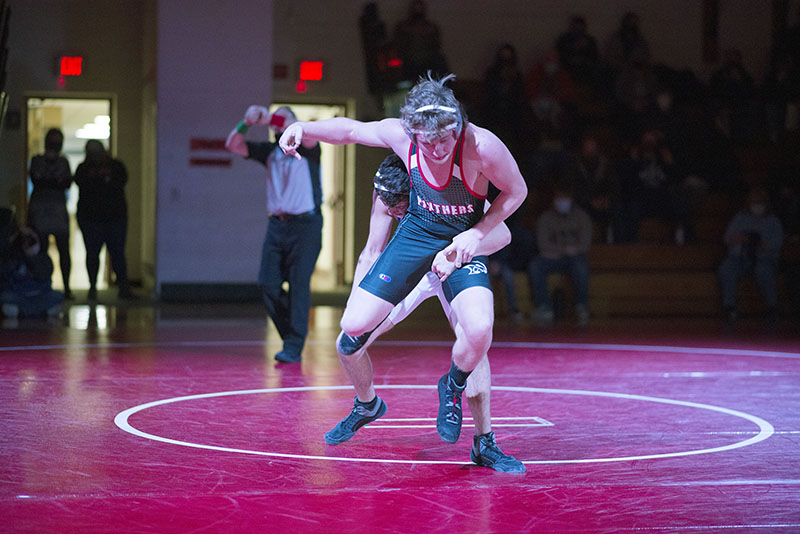 NEW RICHLAND — After moving the meet up to late afternoon in anticipation of inclement weather, the NRHEG wrestling team opened its season Thursday against Maple River.

The early season woes got to the Panthers, staying in the dual against the Eagles until the end, but ended up costing them in the end, losing 42-33.

In the first match of the afternoon, NRHEG eighth grader Seth Staloch lost via pinfall to his opponent at 106 pounds. Freshman Parker Bunn returned the favor in the next match, picking up a pinfall in the final minute of the third period at 113 pounds.

Freshman Annabelle Petsinger gave the Panthers a 12-6 lead after receiving a bye at 120 pounds, and Junior Nikolas petsinger extended the lead to 18-6 after a 13 second pinfall at 126 pounds.

Maple River cut into the lead and took it for themselves by winning the next four consecutive matches. NRHEG lost a forfeit at 132 pounds, and sophomore Ethan Thompson lost in a second-period to a ranked opponent at 136 pounds to knot the score at 18-18.

Seventh grader Deven Parpart dropped his match at 145 pounds in a close 8-5 decision. Junior Clay Stenzel also lost in a three-point decision, 7-4, in his match at 152 pounds.

Trailing 24-18 with six matches left, senior Thor Routh got the Panthers back on the winning track with a quick first-period fall at 160 pounds. Freshman George Roesler then dropped his match at 170 pounds in a first-period pinfall. 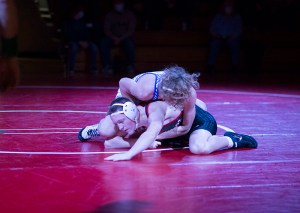 NRHEG sophomore Ethan Thompson fights from the bottom position Thursday in the Panthers first dual of the season. Thompson lost the match in a second-period pinfall. – Tyler Julson/Albert Lea Tribune

No. 10 ranked 170-pounder Ralph Roesler was up next at 182 pounds; however, he ended up being pinned in an overtime period, putting the Panthers on the losing end of a 36-24 score.

Senior Max Seltun closed the gap with a 10-7 decision win over his opponent at 195 pounds. Now down by nine points, the Tigers needed a combination of a pin and decision wins to even the score.

Eighth grader Ben Hagen was pinned in the first period of his match at 220 pounds, locking up the dual win for the Eagles.

Sophomore Makota Misgen ended the night on a high note for the Panthers, earning a pinfall in the first period of his match at 285 pounds.

“Typically the first match of the season is not as good as the matches that happen toward the season’s end,” said head coach Shawn Larson. “This match was no different. We wrestled well, but we also realized that we have much to work on. Even though we have improvements to make, we had several great performances today.”

Larson mentioned pinfalls from Bunn, Nikolas Petsinger, Routh and Misgen, as well as a strong performance from Seltun as highlights of the dual.

“Looking toward the future, if we can find a way to win the close matches and not give as many bonus points, we can look forward to some success,” Larson said. “At this point in all honesty, we are extremely happy that we had the ability to compete tonight and we will look forward to our next chance.”

The Panthers fall to 0-1 to start the season and will be back on the mat Thursday on the road against United South Central.