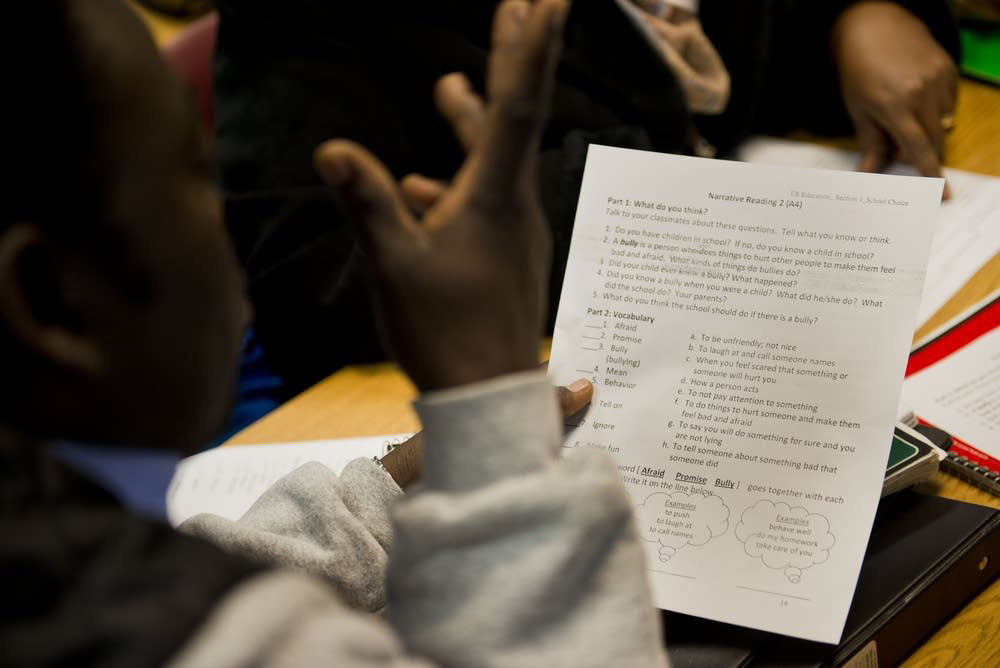 A student asks a question in a class for English language learners in November 2013. A state and federal requirement to assess language proficiency among immigrant children is set to begin this month, but advocates are asking federal officials for a waiver due to COVID-19 risks. Amanda Snyder/MPR News 2013

Advocates for English-language learners in Minnesota’s K-12 schools had been pleading with state education officials to postpone mandatory testing this month, saying it was one more inequity for immigrant children during the pandemic.

The series of annual tests, which measure language proficiency, need to be conducted in person, and advocates say that requirement puts students and their families at risk of contracting COVID-19. Educators also argued that the tests might not be an accurate measurement of skills during a year of disruptions and remote instruction.

On Friday, they scored a partial win when Minnesota Department of Education officials announced an extension to the testing window to offer more flexibility for schools and families.

The test, which is called ACCESS — Assessing Comprehension and Communication in English State-to-State, is a federal and state requirement for all ELL students in kindergarten through 12th grade. The assessment is used to monitor immigrant students’ progress in reading, writing, listening and speaking and determine whether or not they need to stay in the program.

Educators, parents and students plan to hold a virtual rally Monday to ask federal officials to waive the testing requirement this year, which is set to begin Jan. 25 and run through April 16 in Minnesota.

Sam Ouk, the equity and multilingual program coordinator for Faribault Public Schools and an organizer of the rally, said advocates will continue to support immigrant families whose students have already lost instruction time due to the pandemic.

He said the exams force them to miss more classes.

Depending on the school district, the Minnesota Comprehensive Assessments (MCAs) don’t amount to a loss of instruction time, but ELL students in grades one through 12 must take a series of four ACCESS tests and miss classes while they complete them.

A survey by MinneTESOL, an association of teachers of English as a Second Language in Minnesota and neighboring states, received responses from 786 educators in which 98 percent said the test should be postponed. Safety was the primary concern.

Educators also indicate that ACCESS and MCAs might not be an accurate way to plan instruction for certain students. According to the survey, respondents said test scores will likely be lower as a result of  interrupted schooling this year and will not necessarily inform their lesson planning.

But Minnesota Department of Education Assistant Commissioner Bobbie Burnham said ACCESS is a federal and state accountability measure that the department does not have authority to waive.

“It’s really one of the few statewide tests that will give you a real point in time data point,” she said. “One of the main purposes of the ACCESS test is to help teachers and family understand the learning progress so that they can potentially be exited from the English language program.”

But parents have shared their concerns about getting sick because of the requirement to administer the test in person. People of color and immigrant families have been disproportionately hit by COVID-19, and they say that standardized tests should not be the priority when students return to school buildings this spring.

“We understand that one of MDE’s roles is to make sure we’re accountable to the federal government,” Ouk said, “but we want to remind them that educators at all levels, MDE included, should be accountable to our students.”

Officials with the Education Department say many of the state’s youngest learners are returning to school buildings this spring and the extended testing window aims to provide flexibility so that families can plan ahead.