The Tribune won first place in the Editorial Page as a whole category for daily newspapers with circulations under 10,000. 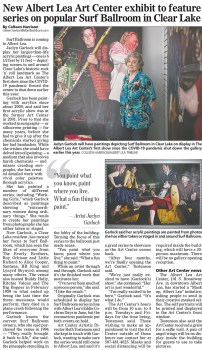 Former Photo Editor Colleen Harrison received an award for the story she wrote on an Art Center exhibit.

The contest traditionally features an awards banquet, but the ongoing pandemic forced this year’s ceremony to be held online. The contest recognized work between September 2019 and August 2020.

Two first-place awards highlighted the Tribune’s year: Advertising Excellence and Editorial Page as a Whole. Both wins were against daily newspapers with circulations under 10,000.

The judges noted the directories in commenting on the advertising award.

“Well laid out and good use of color,” they said. “Good use of directories. Attractive.”

For the editorial page, the Tribune topped publications in Bemidji and Willmar.

“Nice variety of staff and community opinions,” judges said of the editorial page entry. “Paper calls (the) community to action.”

About the Tribune, judges said, “Clean, very readable, and easy to follow. Nice variety of local stories plus localization of national stories. Editorial pages full of columns, including managing editor (Sarah Stultz’s) column on her own family’s COVID-19 scare.”

Judges called her writing “exceptional” and noted that she “draws more than mere description” in her winning entries.

For the Editorial award, judges said, the opinion pages were “community focused, simple and clear — nothing earth shattering, but not overly political — which is a boon to readers.”

For the design, judges said, “Nice use of front for main or feature headlines. Not a big fan of colored type, but tasteful us of well-chose color helps complement the main headline.”

The newspaper contest is held annually for both college and professional newspapers.