5 from Lake Mills, 1 from Northwood-Kensett qualify for state wrestling 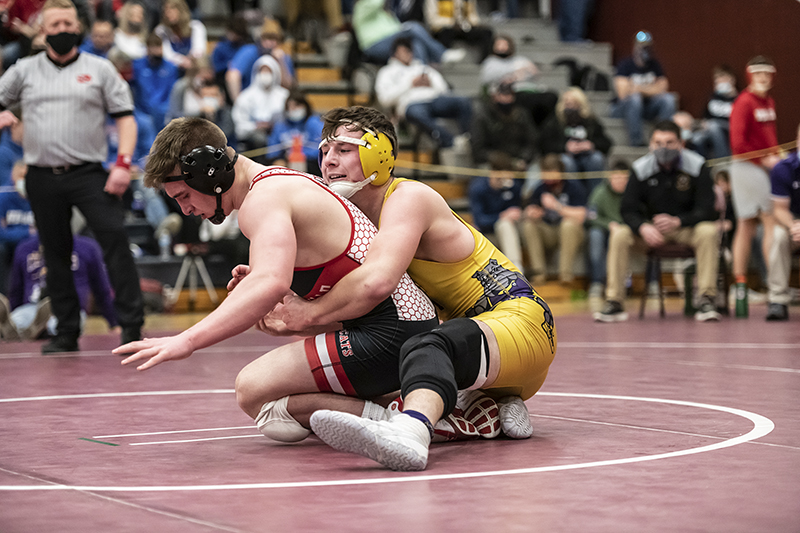 Lake Mills senior Elijah Wagner fights to keep control over his Riceville opponent in the first-place match at 182 pounds. Wagner won the match in an 8-0 major decision and is one of five Bulldogs to advance to the state individual tournament. Lory Groe/For the Albert Lea Tribune

CLARKSVILLE, Iowa — Alex Beaty and Elijah Wagner won individual titles and three other Bulldogs qualified for the state meet Saturday to lead Lake Mills to the Class 1A District 4 title.

Other Lake Mills qualifiers for the state meet, which begins Thursday in Des Moines, were: Dalton Thorson (138 pounds), Brett Peterson (152), and Casey Hanson (160).

In addition to a deep lineup wrestling for individual honors, Lake Mills will also complete in the team dual finals on Wednesday.

Beaty (34-3 overall) and Wagner (31-2) each recorded pins in their semifinal matches and were comfortable winners in their district final matches.

Lake Mills’ other qualifiers advanced to the district finals, and two won true second-place matches to qualify for state.

Thorson (34-4), wrestling at 138, posted wins in his semifinal and second-place matches.

Casey Hanson (35-2, 160) lost a 7-3 decision to Northwood’s Tiedemann in the final. Hanson won his other two matches on Saturday by pinfall.

Three other Bulldogs competed in Clarksville. 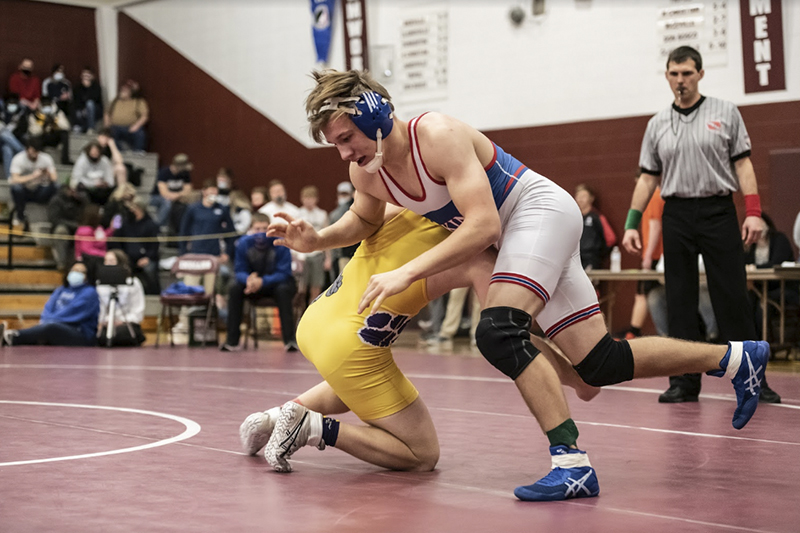 Northwood-Kensett junior Drake Tiedemann avoids a takedown attempt Saturday at the district meet in Clarksville. Tiedemann won the match 7-3 and is the lone Viking advancing to the state tournament. Lory Groe/For the Albert Lea Tribune

Tiedemann improved to 40-7 on the season with a win over Hanson in the 160-pound final. The junior won his semifinal bout by technical fall.

Northwood-Kensett’s other district grappler, Treycen Rollene, went 1-2 at 120. He won his third-place match over Zach Howes of Central Springs by pinfall.

Lake Mills competes in the team dual tournament on Wednesday. The No. 4-seeded Bulldogs take on No. 5 Woodbury Central from Moville. The consolation and championship rounds are later that day.

Saturday’s action begins at 10 a.m., with the finals scheduled for 6 p.m.