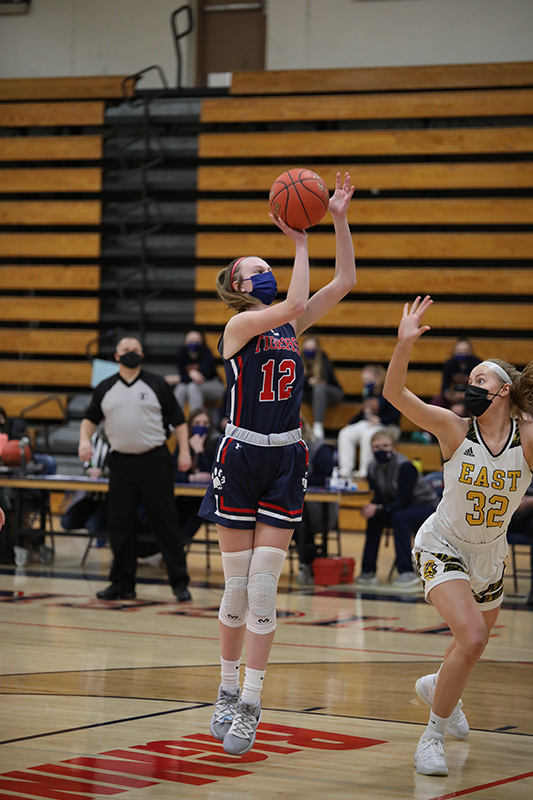 Albert Lea junior Jordan Juveland hits a turnaround jumper in the second half against Mankato East Friday night. Juveland led the Tigers with 10 points in the loss. Kelly Hendrickson/For the Albert Lea Tribune

Despite holding the lead more than halfway through the second half, the Tigers were unable to hold on for the win, falling to the Cougars 39-33.

It was a slow night for both offenses, as neither team was able to swing the momentum in their favor.

Sophomore Morgan Luhring opened the scoring for the Tigers with a jump shot to even the game at 2-2.

The two teams traded the lead back and forth over the next few possessions, but neither gained more than a three-point advantage over the other.

Juniors Jordan Juveland and Taya Jeffrey did a majority of Albert Lea’s scoring in the first half. Juveland had six points and Jeffrey had five points at the half. Eighth grader Nevaeh Wacholz had four, Morgan Lurhing had two and junior Annika Veldman had one. 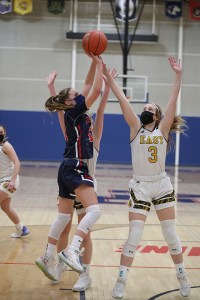 Taya Jeffrey puts up a contested shot Friday at home. Jeffrey had nine points and is 20 shy of her 1,000th career point. Kelly Hendrickson/For the Albert Lea Tribune

Despite the low-scoring half, the Tigers went to the break only trailing the Cougars by one, 19-18.

The Tigers took control in the second half and took the lead back for themselves. Veldman, Jeffrey, senior Mallory Luhring and sophomore Kendall Kenis all hit shots that allowed the Tigers to take a 26-22 lead.

Mankato East was forced to take a timeout, and quickly tied the game at 26-26 with about 10 minutes left to play.

After the Cougars once again tied the game on their next possession, Jeffrey hit a pair of free throws to give the lead back to the Tigers.

East hit three shots over their next possessions to then take a four-point lead, forcing Albert Lea to call a timeout. Albert Lea cut the lead to two, but was unable to pull any closer. Juveland hit another shot late in the game and Morgan Luhring made one free throw, but it wasn’t enough to overtake the Cougars.

Juveland led the Tigers with 10 points, while also recording four rebounds. Jeffrey had nine points, two rebounds and two steals; she is 20 points away from scoring 1,000 career points.

Wacholz had four points, while Veldman and Morgan Luhring each had three. Kenid and Mallory Luhring both ended with two.

The Tigers fall to 2-10 this season and will be back on the court Saturday when they host the 5-4 Raiders of Northfield. The last time these two teams met was in the first game of the season, when the Raiders came out on top, 61-51.